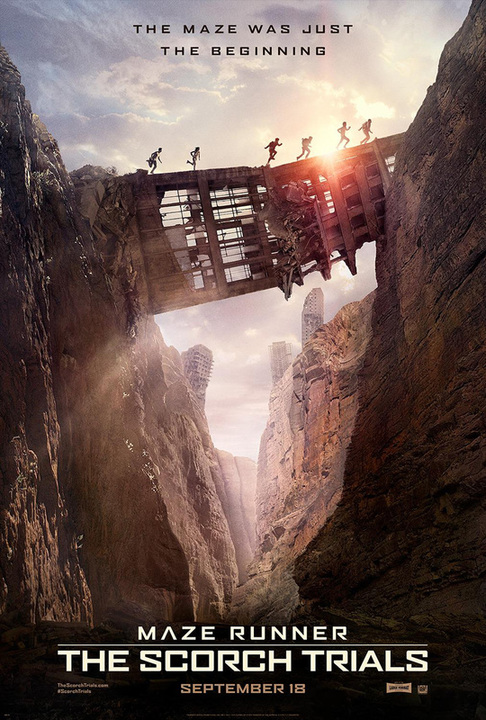 Not long after reading The Maze Runner series, I found out they had made a movie for the first book. I wasn't exactly thrilled by the series, but I thought it to be decent, so a week or so later I watched the movie. The movie was good, enough to make me want to watch the next movie in the series, which would be coming out that September.

It wasn't what I was expecting.

The Maze Runner movie followed the plot decently. It didn't stay perfectly on course, as to be expected, but it didn't wildly stray from the main plot either. I expected to see this in The Scorch Trials and was more or less satisfied. It kept up with the general plot of the book — you see the same characters following roughly the same path, doing roughly the same things.

That the movie would change, leave out, or add details of the book's plot is completely expected. It is certainly nothing to complain about, for every movie that is based off of a book does the same thing. Love and action scenes are added to make it more entertaining. Details may be twisted, though the general plot stays the same. However, I was shocked at how much was changed in the book-to-movie conversion. The overall plot may have been roughly the same, but many details were twisted — some for better, some for worse.

The movie starts off with Thomas and his friends in a place where they are supposedly safe from WICKED. Thomas discovers pretty quickly, with the help of his friend Aris, that things aren't what they seem. After a dashing escape, including the rescue of Teresa, they head away from WICKED out into the desert.

Once they reach the desert, much of the movie seems to focus on Thomas and his friends running around while being chased by Cranks. It strikes me as an attempt to make the movie more action-packed and it definitely was action-packed. It was just a little too much of the same action for my taste though. Seeing Thomas just barely escape the Cranks in a dashing chase gets old after a while.

Oh yes, and I did not realize the Cranks were the equivalent of zombies. In the book, the Cranks seem to be a sort of adaptation of zombies. They do share some aspects with the standard zombie, but they also have some unique characteristics in comparison. Some Cranks can speak and move just like humans can and they also don't have the burning desire to bite human flesh. Having the Flare had always struck me as being less of turning into a zombie and more of suffering from a slow descent into insanity. A Crank fully succumbed to the Flare, however, might indeed resemble a zombie.

The Maze Runner was a fantasy movie. The Scorch Trials is a horror movie. The Cranks have been completely turned into zombie-like creatures, even spreading the Flare through bites — something that doesn't occur in the books.

The movie gets better once the friends reach the dwelling of Jorge and Brenda. They are captured by Jorge and soon afterwards are found by WICKED as well. Jorge and Brenda are initially mysterious characters for the audience is not sure whether they are for or against Thomas and his group. After yet another daring escape from WICKED, Thomas and Brenda end up alone trying to find Thomas's friends. Once again, we see Cranks appear on the scene and we get to watch Thomas just barely escape after an action-packed chase.

Thomas and Brenda end up finding everyone else. They had heard rumours of a group working against WICKED and set out to find them. Pretty soon they do, where Thomas finds out he has inadvertently been helping this group for a while.

At first, I was not sure whether to be for or against the idea of a serum that prolongs the Flare. I was initially against it for the simple reason that it was not in the books, but it does add a certain suspense. Brenda ends up getting bitten by a Crank and therefore needs to use this serum. No one knows exactly when the serum will wear off and since Brenda is designed to be a likable character that nobody wants to turn into a Crank, my personal opinion is that the serum adds to the suspense of the movie.

While at the camp, Teresa betrays the others by sending for WICKED. After an intense battle scene, not everyone in Thomas's group manages to escape WICKED and the movie ends with Thomas making a determined speech about how he is going back for everyone who was captured by WICKED.

Teresa's betrayal is certainly different to that of the book. For one, according to the book, WICKED supposedly forced her and her friends from Group A to almost kill Thomas. Also, it had nothing to do with telling WICKED where their locations were. In the movie, however, she voluntarily contacted WICKED and told them where to find everyone. Both were ways of driving a rift between Thomas and Teresa.

One problem I had was that it took a whole movie to pretty much put everyone back at square one. Thomas and his friends had rescued Teresa from WICKED, escaped WICKED, picked up a few characters along the way, lost a few characters along the way, ran from Cranks, ran from WICKED, and now they have to rescue people from WICKED all over again. Also, this did not happen in the books so I am not sure where they are going to take this — though Thomas did give a stunning version of the heroic speech that the main characters tend to give in order to rally everyone's spirits.

Was The Scorch Trials a success? I'm not sure. Will the next movie, The Death Cure, be worth watching? Again, I am not sure. I'll cross that bridge when I come to it.