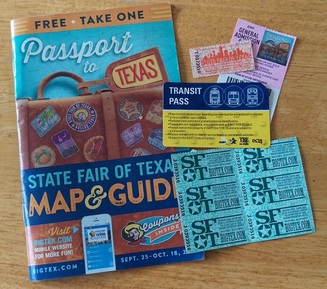 For about a year, Cody kept telling me that he wanted to take me to the fair, so I should visit him during the State Fair of Texas. In October, I took a couple of days off from work and spent a week in Texas.

From 1886, with a few gaps during the World Wars, the State Fair of Texas has been held every year in Dallas. A group of businessmen created the fair to showcase Texas through races, shows, contests, and concerts. The fair has also attracted notable people, including several Presidents. Over the years, exhibits have come and gone, but the spirit remains the same. The State Fair of Texas begins on the last Friday in September and lasts for 24 days.

We agreed to go to the fair on Saturday, so we could meet up with the busy bee and fellow Slytherin, Hope Stark. The decision to take the train and avoid the hassle of driving to Dallas and attempting to find parking was an easy one. But it was the last Saturday of the fair and the train station was PACKED. I was impressed with the Dallas Area Rapid Transit (DART) system though. It reminded me a lot of the MRT (Taipei Metro) and is much more convenient than NJTransit at home. We rode the Red Line to downtown Dallas and switched over to the Green Line to reach the fairground. The benches at the train station are wavy in shape, which inspired our chant as we followed the crowd to the entrance of the fair. 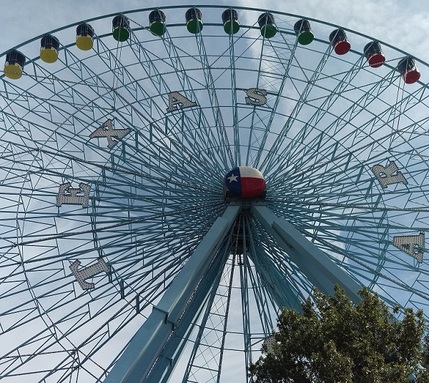 It was around noon when we got to the fair. Hope had to drive and entered the fair on the opposite side. We decided to meet in the middle by the hard-to-miss 55-foot (16 m) cowboy statue named Big Tex. This was the new Big Tex. The original one was destroyed by an electrical fire in 2012, but he did survive 60 years! There were too many people around Big Tex to get a good picture, but I did snap one of the Ferris wheel. At a height of 212 feet (65 m), the Texas Star has been the largest Ferris wheel in North America since its debut in 1985. I'm glad we got to the fair early. By the end of the day, the fairground was so crowded. Luckily, we had Hope with us to help force our way through mobs.

Hope spotted us in line buying coupons, the currency used for everything at the fair. Coupons are used to play games, go on rides, and buy food. The native Texans scolded me for not understanding the term "chicken fried." That was quickly remedied when I had some chicken fried bacon. There were fair favorites such as corny dogs, turkey legs, and Tornado Taters. Also, almost every food imaginable was deep-fried – Oreos, Twinkies, Coke – including an entire Thanksgiving feast. The fried mac and cheese was delicious. I must've said "We should get ice cream!" over 20 times, but Cody made me hold out until we located the fried ice cream. And it was worth the wait! There were also people handing out food samples. We got chili, Mountain Dew (Cody's favorite!), and lots (and lots and lots) of pudding. 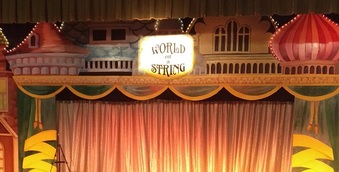 A large variety of shows ran throughout the day. The State Fair of Texas has hosted a full blown auto show since 1904. There were live cooking demonstrations and competitions. We watched a few BMX bike stunts and saw Gypsy horses. The best show was World on a String, a marionette puppet show. A hand-drawn Big Tex on a whiteboard was the opening act. He riled up the crowd by telling Texas jokes. "What? Are you from Oklahoma?" was his taunt when the response wasn't loud enough. Although I'm not from Oklahoma, Cody and Hope had to teach me some Texas history. (But I honestly still have no idea when to clap during "Deep in the Heart of Texas.") The puppets were amazing! There was an acrobatic bear, a haunted pirate ship, and flamingos dancing ballet. A highlight of the show was a tribute to Jim Henson – his original skit with Kermit the Frog.

Shiloh Adlar of Ravenclaw was also in the area that day, attending the much healthier Texas Veggie Fair. We were swapping texts throughout the day. Her bright pink juice containing pineapple, apple, ginger, and beet almost made me feel guilty about everything I had consumed that day. Shiloh agreed to meet all of us at the entrance of the State Fair of Texas. Even though we were all tired, we still managed to exchange a few words – and Quidditch jabs – before we went our separate ways. I definitely anticipate more Texas HOL meet-ups in the future!