Inferno - Not So Hot as It Should Be
Maxim Trevelyan 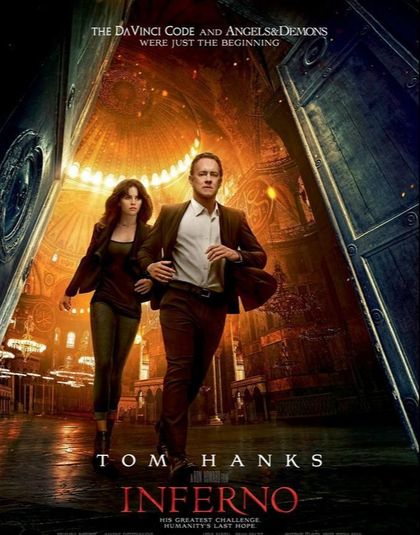 I have been a fan of Dan Brown's works for a while, but interestingly, not through his Robert Langdon works. I first read Digital Fortress and Deception Point, continuing onto Angels & Demons that way. Brown’s way of telling a story really draws a reader in, and through seemingly complicated codes, science, religion, history, art, architecture and plots, shows us a brilliant literary masterpiece.

Naturally, as a fan of his work in anticipation of his next Robert Langdon novel, Origin, coming out this year, I was excited to hear that a new movie, based on his latest hit, Inferno, was going to hit the theaters. Inferno is my definite favorite of his works, because it touches on very real problems present in our society, offers a solution to fix it (albeit very controversial) and has little to do with faith, opposing Angels & Demons and The Da Vinci Code, his previous Robert Langdon works.

Unfortunately, I did not have the opportunity to see the movie until early days of 2017, but I was really excited. However, when I exited the movie theater, I found myself really confused and even a little bit angry. Now, I realize that movie will never be as good as the book, nor could you really incorporate everything from the book into the movie. However, changing something as fundamental as the ending is simply inexcusable. Especially when the book ending carried such a powerfully conflicted message.

To tell you some basics of the story, just so you will follow easier if you did not read the book or seen the movie, at the start, Robert Langdon wakes in an Italian hospital, with a serious case of retrograde amnesia. He has no idea how he came to be in Florence. Langdon is sweating, panicking and suffers from disturbing hellish images of suffering, burning, twisted bodies and rivers of blood. Soon after he is on the run with the doctor who took care of him while he was in the hospital, Sienna Brooks, who coincidentally is familiar with Langdon as well as the literary work, Dante’s Inferno. They find out that a mad revolutionary scientist named Bertrand Zobrist, devised a virus and plans to release it. Inferno virus will cull the Earth’s population in half in an effort to stall the sixth extinction due to human’s overpopulation of the planet. Langdon and Brooks are following the path to stop this from happening.

As a viewing experience goes, the movie overall was not bad, yet not particularly good either. If you are a fan of Dan Brown movies and have two hours to spare, I urge you to see it. Since the movie itself is centered on Dante’s Inferno, you of course have explanations for amateurs, but either due to bad screenplay or actors’ performances, sometimes you get the feeling of being patronized. As if you are forcibly listening to the information that could really be gleaned even by the most unknowledgeable about Inferno and some Googling. They also changed some characters’ personalities and motives, but if you are not familiar with the book, you will not even notice.

All that can be overlooked, I suppose, but the biggest issue I took was with the ending, as mentioned before. In the movie, Langdon, together with some help from World Health Organization manages to contain the virus and save the world. Pretty standard ending, similar to previous two movies, good triumphs over bad, so that has to be the book’s ending too? Nope. In the book, it is discovered that the container holding the virus had dissolved one week earlier in the cistern waters, where it was placed, meaning that the whole world has already been infected. Inferno virus is revealed to be a vector virus that randomly activates to employ DNA modification to cause sterility in one third of humans, reducing population growth and not instantly killing half the population as thought.

The world and WHO specifically are left to contemplate whether they want to keep Zobrist's solution to overpopulation in place, since they admit he did have a point and reversing the decision will not only be difficult, but it may not work at all. I think Hollywood wanted to make the ending more exciting action-wise, but instead it gave us a saccharine cliché that totally takes the meaning of many characters’ actions away.