The 2016-17 Quidditch season has been full of rescheduled games, postponed Seeking matches, and last-minute referee search parties. All four houses are scrambling to put lineups together each month. But if we have learned anything from the first half of the season, it is that Quidditch always finds a way.

Although one match – Gryffindor versus Slytherin – has been postponed until after the first term ends, I believe we have already seen enough to form opinions on the overall strength of each team. Here are the results of my 2016-17 Mid-season Power Rankings!

4. Gryffindor (0-2)
Quidditch always finds a way – and a lot of the time, it has the Gryffindor Quidditch Team to thank for it. GQT Captain Jenny Lupin has clearly mastered the summoning charm as she is able to pull a team together on a monthly basis. Despite the team’s struggles these past few years, Gryffindor looked like they were on an upswing in their last match against Ravenclaw. They are just a player or two away from rocketing up the standings.

3. Hufflepuff (1-2)
The Badgers have yet to field a full lineup this season, but the players that have played are looking pretty spiffy. Hufflepuff was just a handful of questions away from upsetting the defending champions in December and looked very impressive in their match against Ravenclaw. HQT has some new blood in Maxim Trevelyan and Katelin Ross to couple with the veteran presence of Captain Marcie Hobber and Co-captain Tarma Black. If this squad sticks together, Hufflepuff has definitely found the formula for success. Expect more victories in the future.

2. Ravenclaw (2-1)
Ravenclaw has their work cut out for them if they want to take back the Quidditch Cup this year, but they definitely have the talent to do it. Pavel Lagrange is HOL’s leading goal scorer this year, while Arielle Lemoyne has found her groove between the goal posts. RQT also has a few rising stars in Elena Galatas, Gail Allen, and Hannah R Thomas. Keep an eye on them, as their progression over these next few months could be a deciding factor in Ravenclaw’s rematch against Slytherin in May.

1. Slytherin (2-0)
A shaky performance against Hufflepuff raised a lot of questions about the Slytherin squad. SQT put these questions to rest in their match against Ravenclaw as they took an early lead and ran away with it. Co-captains Darcey Goode and Will Lestrange paved the way with a combined forty-two goals in two matches, while Scarlet Leslie-Lewis was named MVP in her debut as Slytherin Keeper. SQT still has to play their rescheduled match against Gryffindor, then they move onto their final opponent: complacency. With four matches left in the season, there is still plenty of Quidditch to be played. Slytherin has a lot of work ahead of them if they want to keep the Cup in the Dungeons. 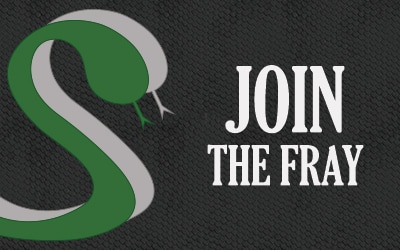