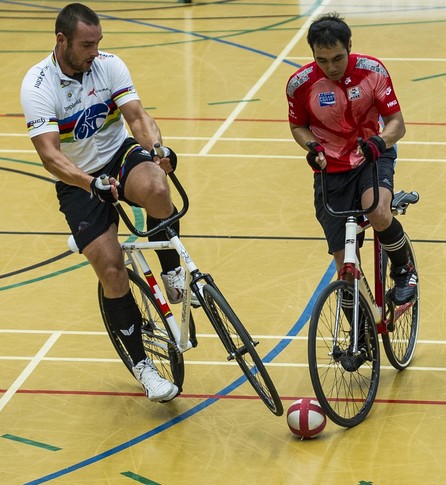 I had the pleasure to watch and try to play this sport. "Tried" being the keyword, as I was not particularly successful. While a fun sport to play, it is quite difficult if you are not that handy with a bike.

Cycle ball, also known as radball in German or indoor cycling to make it sound more serious, is in simpler terms, soccer played on bicycles. This sport is still relatively central to Europe (with Germany being its birth mother, delivered in the USA), but it is gaining in popularity all around the world.

Going by the first paragraph, you might think that cycle ball is a new sport, but that could not be further from the truth. The first unofficial championship was held in 1888 in the USA, with German-American Nicholas Edward Kaufmann in charge, under the name artistic cycling. Unfortunately, it was not available for public viewing. However, due to poorly kept records, it is unknown just how many nations sent their athletes to this event. 1893 marked the year of cycle ball being played in public for the first time, again in the USA. Nowadays despite its US upbringing, cycle ball all but disappeared from America and moved back to its roots, to Germany, who is the leader in championship wins in cycle ball.

Interestingly, cycle ball was largely played by men only, with women taking on artistic cycling, which was similar to gymnastics, but on bikes. There are two teams, with each team consisting of two players, one who may act as a goalkeeper, the other a field player. They may try to shoot a ball made of horsehair through their opposing team’s goal, using their heads, or the bike’s front or back wheels.

Each match consists of two halves, each seven minutes long, where the players have to keep their feet off the ground to avoid the other team getting a free kick and of course, the goal is to score more goals than the opposing team. You are allowed to use your hands while defending a goal, but you rarely get the opportunity to use them, as the ball gets struck in unusual ways during the match.

The court measures 36 feet by 46 feet, with an additional one foot wall around the court to keep the ball inside it. The bicycles are not ordinary bicycles, as they are specially optimized with the seat positioned over the back tire, a single gear, so it does not break and players can easily move backwards, and handlebars pointing straight up.

Cycle ball is popular in Europe, most commonly in Austria, Belgium, Czechia, Denmark, France, Germany, Russia, and Switzerland, as well as in Japan. The most successful team to date consists of the Pospišil brothers from the then Czechoslovakia, who were world champions twenty times between 1965 and 1988.