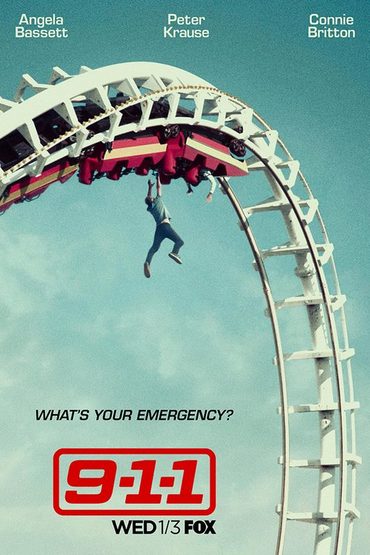 I am a big fan of American Horror Story and American Crime Story, so when I heard that the main creators, Ryan Murphy and Brad Falchuk were in the process of making a new show, I could not wait to check it out. Not to mention that one of the show’s leads is Angela Bassett, who was a regular in American Horror Story, playing Marie Laveau, Desiree Dupree, Ramona Royale, and others in the mentioned anthology series. She is not the only famous (and good) cast member on the new show either.

9-1-1 is a show that focuses on the life of first responders; dispatcher Abby Clark (played by Connie Britton), Athena Grant (Angela Bassett), a patrol sergeant in LAPD, and a group of firefighters, led by Bobby Nash (Peter Krause). The show focuses not only on their high-pressure work situations, but how they balance saving (or losing) people with problems in their personal lives.

First episode starts with a bang and its fast, action-packed minutes keeps you on the edge of the seat for its whole duration. Pre-credits, you already see a near drowning and a jumper, which are quickly swept under the rug in a favor of three unbelievable emergencies with each being resolved almost as quickly as it was introduced; a stoner that hears a baby crying in the walls, which, despite the improbable odds is exactly what happened, a woman that is being strangled by none other than her massive snake Spartacus, and a child who is alone at home when murdering thieves break in. Despite the weird emergencies, at least the first two, what I was mostly shocked by and found unbelievable is that everyone in main three emergencies had a happy ending (well, except the snake). This is most unusual, since the show runners did not shy away from people dying in all sorts of ways imaginable in American Horror Story. However, this is quickly remedied in the second episode, where a death on the scene shakes the life of the youngest, and most reckless, firefighter and introduces the show’s first ending cliffhanger, where an overdose hits close to home for Athena Grant.

Most people say the show is unrealistic about the lives and work of first responders. I agree with the sentiment, but the heavy critics need to remember that this is a drama series, not a reality show. I recommend this show to anyone who likes drama, high-strung action situations and a need to turn off their brains for 45 minutes.