This issue we will look at a young, very energetic and acrobatic game that combines the elements of volleyball, soccer, gymnastics and music. Bossaball originated 2005 in Spain and was thought up by a Belgian, Filip Eyckmans. Its name comes from a Brazilian Portuguese word “bossa,” translated as style, flair or attitude and is also very closely associated with samba type of music, called Bossa Nova. So, if you know your languages, you can guess what this sport’s aims are; to combine athleticism with rhythms of music. 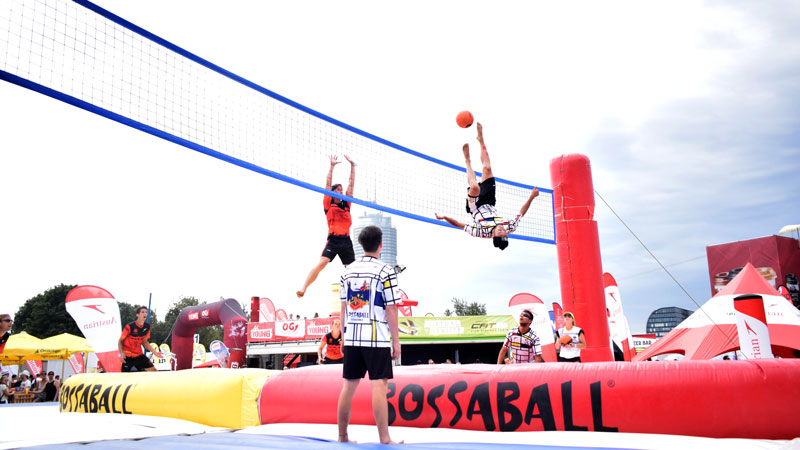 Bossaball is played between two teams with four players on each side. The court is a very special, inflatable one, with a safety zone (or out area), playing area, where three players are and trampoline area, with one “attacker.” On the middle of the court, there is a net, over which is ball must pass, similarly to volleyball. The play is pretty similar to said sport as well; the round starts with a serve, which must go over the net and into opposing team’s playing area. They must use a combination of not less than five contacts to send the ball to the other side. The contacts can be performed by any part of the body and are divided into two groups, a volley touch (lower arms, touch, spike or drop shot) or a soccer touch (touching the ball up to two times with any part of the body except arms and hands). However, if more than three contacts are made to pass the ball over the net, one of those needs to be a soccer touch.

As already mentioned, big part of bossaball is music. This is taken care of by a “samba referee,” who makes calls and is also a Master of Ceremonies. They make use of a whistle, a microphone, percussion instruments, and a DJ set to incite players through the rhythm to make fabulous leaps and athletic performances on the court.

There were several World and European Cups, each year from 2009, where all interested countries could participate. The country who won the most is the Netherlands (5 times), followed by Belgium (3 times).

Bossaball is not only limited to Spain and European countries, but is also present in Brazil, Argentina, Mexico, Israel, Egypt, Saudi Arabia, Kuwait, Qatar, Singapore, Chile, Ecuador, Paraguay, and Venezuela. I have not yet had the pleasure to try my hand at it, but it sounds and looks like an amazing sport to participate in.