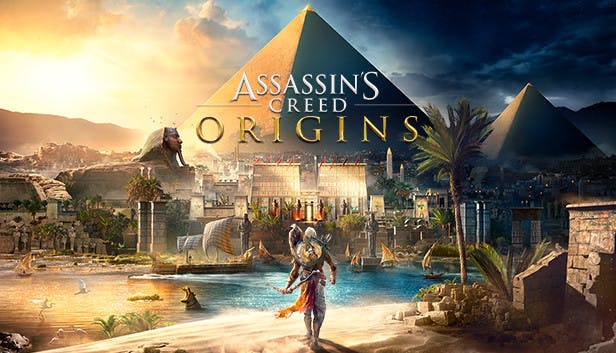 Assassin's Creed: Origins is the tenth big installment in the Ubisoft's Assassin's Creed series. The game is set in Egypt and follows the story of Bayek, a Medjay who seeks revenge for a big loss in his life. The game explores the beginning of the Brotherhood of Assassins, who, despite the name, fights for peace and humanity's free will against The Order of the Ancients, modern Brotherhood's enemies, formerly the Templar Order.

A staple of Assassin's Creed games is that a new one is released every year. However, with Origins, Ubisoft took two years to complete the game and it paid off. Almost all new or revised mechanics turned out for the better, especially combat. That became smoother and gives more power to the player than in the previous games. There are more quests available, each with an interesting story behind it. Even when you are completing side quests to get more experience, you never have the feeling that you are playing a 'fetch quest' something a lot of games fail at, so the story is pretty engaging.

As an Assassin, like always, you have the option to climb on almost any building or a cliff. The views from the tallest points in the game are just breath-taking. For best feeling of awe and wonder you can climb the Keops pyramid in Giza. Just take some time to take in the view, and then slide down. Fun and enjoyable!

However, I do have some issues with the game, though nothing really game-breaking or that would really keep someone from enjoying playing it. Aya and Bayek are Assassins, whose ring finger is cut off so they can use the Hidden Blade. However, despite her using it, Aya had her finger until almost at the end of the game. I noticed it immediately as it was quite a breach of the lore, but it might have just been a glitch in my version of the game.

Second thing I disliked had to do with game saving and fast travel points. There is no save game button as the game does it automatically, but the way it does it, you can lose quite some progress if you are just exploring. Most sure way you can save is to travel to fast travel points. However, some of these are spaced really weirdly. Instead of having them spaced evenly around the areas, you sometimes get one on a large empty space and five of them around big cities. It would be much better to have them more even than they are in the game.

My last gripe with the game is some of its story. I severely disliked the protagonist's wife, Aya. While, I suppose, she is a well written character, her behavior towards Bayek is horrible. He wants to keep them together after a big loss and revenge, but she acts really dreadful, especially at the end of the game. I also dislike how she becomes way more important than Bayek, despite him doing most of the work. So, naturally, I took issue with how the game ended, namely, how we finished the story as Aya. You spent hours and hours building Bayek up, connecting with him, but then finish the game as Aya, sometimes with a totally different combat style.

Nevertheless, the Assassin's Creed: Origins is a wonderful game to play. After some less than stellar titles from Ubisoft, they came back swinging with this game. It is easier to play, no stealth necessary if that is not your thing, and a nice stepping stone for new players in this universe. I heartily recommend Origins and its successor Odyssey for any old or new video game lovers.