Spider-Man: Into the Spider-Verse
Cody Lewis

I wasn’t sure what to expect heading into Spider-Man: Into the Spider-Verse. From the trailers, I could tell it wasn’t going to be your run-of-the-mill straight-to-DVD animated Marvel movie. I’ve been disappointed with Spider-Man movies in the past, but with “the snap” and the release of Marvel’s Spider-Man for PlayStation 4 last September, I was pumped to see Spidey back in action on the silver screen.

Peter Parker (Chris Pine) is the one and only Spider-Man. He was bitten by a radioactive spider. He swings around New York City and beats up bad guys. I’m pretty sure you know the rest.

Enter Miles Morales. Miles (Shameik Moore) is just a normal high school kid living in Brooklyn. He’s a hip-hop head and an artist. He also gets bitten by a radioactive spider. After an awkward day at school, he encounters Spider-Man, who is trying to stop Kingpin (Liev Schreiber) from activating a particle accelerator that will wipe out the world.

The particle accelerator malfunctions with some odd side-effects, as Miles discovers Peter Parker is not the only Spider-Man -- different versions of the superhero pop up from different dimensions. Peter B. Parker (Jake Johnson) takes Miles under his wing and teaches him how to swing (thwip and release!). And with the help of Spider-Man, Spider-Woman (Hailee Steinfeld) and a cast of other Spider-heroes, it’s up to Miles to save the day. 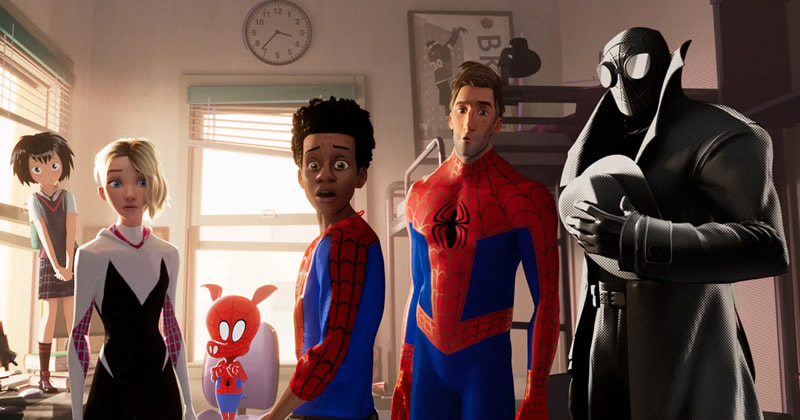 Another key ingredient to a successful animated film is great voice acting. And the casting choices for this movie were fantastic. Shameik Moore is believable as a somewhat-awkward, Afro-Latino teenager who can’t quite remember the lyrics to Post Malone and Swae Lee’s "Sunflower," while Jake Johnson is perfect as the older, past-his-prime Spider-Man. John Mulaney, Nicolas Cage, and Zoë Kravitz round off the star-studded cast.
Speaking of "Sunflower" (which has quickly become my favorite song on the radio), the soundtrack is great as well. Comprised of mainly hip-hop, the music may seem a little out of the ordinary for a superhero movie, but actually fits perfectly for a story centered around Miles Morales. It’s all music you would find on his own personal playlist. Very cool.

I wasn’t expecting it, but I have to say it: Spider-Man: Into the Spider-Verse is a masterpiece. Miles is a refreshing take on a classic superhero and after seeing him in action for the first time, he’s already become one of my favorite Marvel characters. But Marvel fan or not, I highly recommend this movie. There are so many great things going on, I’m sure you’ll find something about it to love.