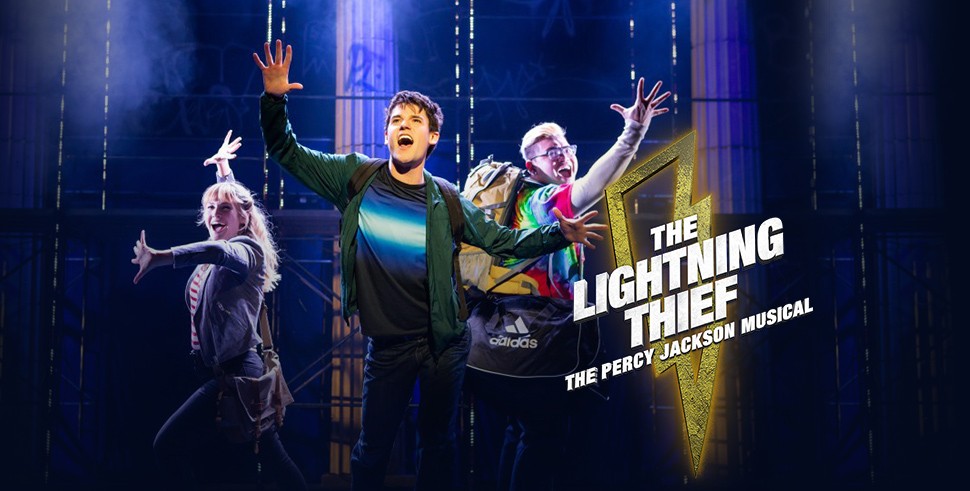 This past fall, the radio kept advertising the limited Broadway run of The Lightning Thief: The Percy Jackson Musical and I took the bait. I read the five-book Percy Jackson & the Olympians series in July, so it was still fresh in my mind. "My Grand Plan" was to buy tickets in December when all the New York City holiday decorations are up. Unfortunately, on the day of the show, it was freezing, so neither Cody and I wanted to linger outside to look at the decorations. There's always next year!

The Lightning Thief: The Percy Jackson Musical began as a one-hour musical intended for younger audiences in 2014. The book is by Joe Tracz, known for writing for the A Series of Unfortunate Events show on Netflix. Music and lyrics are by Rob Rokicki. The musical was adapted from The Lightning Thief by Rick Riordan, which is the first book in the Percy Jackson & the Olympians series, originally published in 2005.

Percy Jackson discovers that he is a demigod in The Lightning Thief. He is blamed for stealing the lightning bolt of Zeus. With the help of his friends Grover Underwood and Annabeth Chase from Camp Half-Blood, Percy must go on a quest to clear his name and prevent a war between the big three Greek Gods.

The entire touring cast also performed on Broadway. Four of them, led by Chris McCarrell (best known for portraying Marius Pontmercy in the Broadway revival of Les Misérables), were original cast members from the Off-Broadway run in 2017. In contrast to the typical musical with a huge cast, The Lightning Thief only had a total of seven different performers. Besides Percy Jackson and Annabeth Chase, everyone else played multiple characters, ranging from Greek gods to demigods to monsters. There weren't any major set changes, making the music the highlight of the production.

I really liked how the musical not only stayed true to the book, but also to the entire series. Even though the focus of the musical is the first book, some of the lyrics alluded to events that will occur in future books. The lyrics were funny and catchy. I would classify a large portion of the songs as rock, since Percy was typically accompanied with electric guitar music, but there was a nice variety. The audience is always an important part of the theatre experience. The Lightning Thief is obviously aimed at a younger audience. We heard a howl of agony when Percy Jackson was injured and squeals of delight when confetti (and toilet paper) was shot into the audience.

Even on the coldest day in December, The Lightning Thief was a heart-warming production about friendship, a hero's quest, and a reminder that "normal is a myth."