​On the weekend of the 8-10th of June 2018, the annual Danish Square Dance convention took place in Ikast –​​ the same city that hosted the bi-annual European Square Dance Convention four years ago. Over the weekend there were 20 hours of dancing planned on six different levels and I know I danced most of those, getting a couple of blisters in the process and having a lot of fun, despite the heat that had decided to join us for the weekend and made it necessary to drink even more water than usual while dancing. 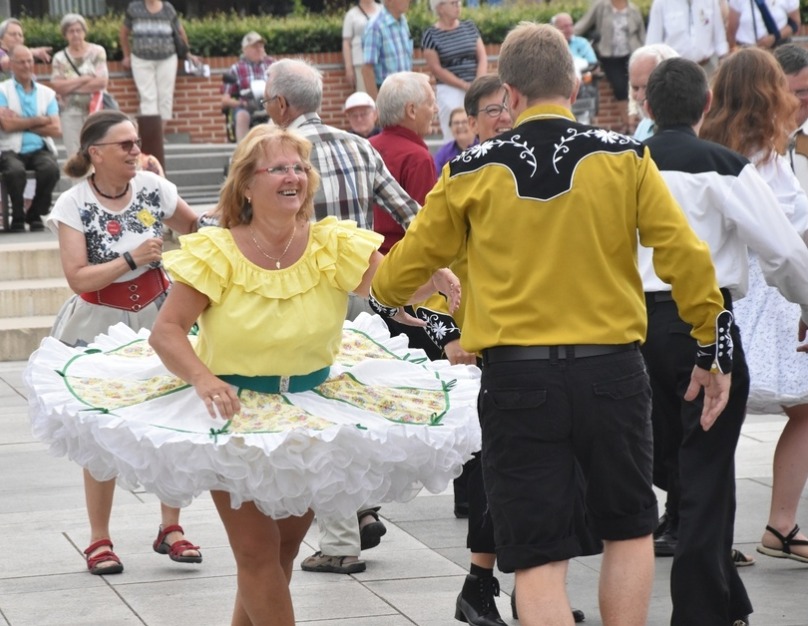 But what is Square Dance?

It originated from folk dances in Europe with the earliest documented dance of the type taking place in the 16th century in England. The dance from that time would look very foreign to modern practitioners of Square Dance though, as the dance as we know it today developed in the USA when people from Europe settled there and their various traditional dances got mixed into new things and developed independently from the original dances in Europe.

And how is it danced?

Unlike many of the earlier dances and indeed dances today, Square Dance does not have a specific pattern to it that the dancers know and reproduce as they have learned it. Rather, the dance has several different figures that are entirely different from each other. At the beginning of any given dance, the dancers do not know what will come, but are told along the way by the caller, who is also the singer. The caller is usually not more than one or two calls ahead of the dancers who will then execute the right figures in accordance with the directions given by the caller. A figure takes anywhere between 2 and 32 beats to complete.

Each figure is called "A Call." These are parted into groups, which are called levels. The lowest level is called Basic, followed by Mainstream, Plus, A-1 (A stands for Advanced), A-2, C-1 (C stands for Challenge), C-2, C-3A and C-3B. The amounts of calls on each level varies, but after Mainstream has been learned, a dancer will have learned about 70 calls. Mainstream is usually the lowest level people stop at and Basic is only there to allow new dancers to state how far along they are in learning when they visit other clubs or special dances.

Once you have learned the calls for a certain level, you will be able to dance that level anywhere; the calls are in English and are international. Although they are English, however, it doesn't mean that anyone speaking English would simply be able to listen and know what to do, as the names are often not directly related to movements. Guessing what to do when told to "Spin Chain and Exchange the Gears" for instance would be very difficult. Some are very logical though. An example of that would be the call "Walk around your corner," but even here you must know what direction you're supposed to walk to avoid colliding with other dancers.

What's up with the clothes?

Many people who have watched Square Dancers will have noticed the dresses with huge petticoats worn by the women and the cowboy inspired outfits worn by the men. This is traditional garb for Square Dance and goes back to the roots as an American Folkdance. While many Square Dancers still wear these outfits for shows, it is not common to wear them for regular dancing anymore, so there is no reason to be worried about starting even if you don't own the right outfits. Often the clubs will even have proper outfits to lend out for shows so the dancers form a cohesive group.