The Right Way to Leave a Kingly Impression
Maxim Trevelyan 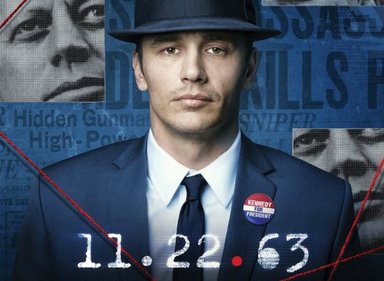 In one of the previous issues, I talked about a movie adaptation of Stephen King’s Dark Tower series, which did not really live up to the hype. For that reason, I was skeptical about a miniseries that was also adapted from King’s books, 11.22.63.

11.22.63 tells a story about a high school history teacher Jake Epping, who travels back in time to stop the assassination of John F. Kennedy, a mission undertaken by his friend who shows him the time travelling ropes. However, the past does not always want to change or change the way we want it to and the consequences of a change can quickly turn exceptionally dangerous.

At first, I got excited about the miniseries due to two reasons. I will check out any adaptation of King’s work, despite the critics or the people hating it. Also, J.J. Abrams was executive producer and I generally love his work. He may have his faults, but he puts out decent pieces. The main role is played by James Franco, which put a bit of a damper on my excitement, since his acting can be hit and miss, but I have to admit that he really surprised me. His portrayal of Jake Epping is nothing short of astounding.

I never planned on doing so, but I binge-watched this miniseries, which I think is really the way to go. The first episode is incredibly attention-grabbing and it will leave you wanting more and more. It slows down a bit in the middle, but, by the end, wonderful and heartbreaking as it is, it picks up again.

While 11.22.63 is science-fiction, it is ultimately a period drama, and incredibly realistic, or as much as it can be really. I really loved the “real-ness” of Franco’s character, especially in the beginning, when he has an exceptional freak-out over the time travelling business. So many times in so many movies and TV shows, characters are calm or in awe of supernatural or otherwise, which means you rarely get the realistic reaction from someone.

I cannot go into more detail without mentioning spoilers, so I will conclude my review with a heartfelt recommendation of this miniseries to any King fan or fans of science-fiction and historical dramas.