The Astonishing Color of After
Prof. Scarlet Leslie-Lewis 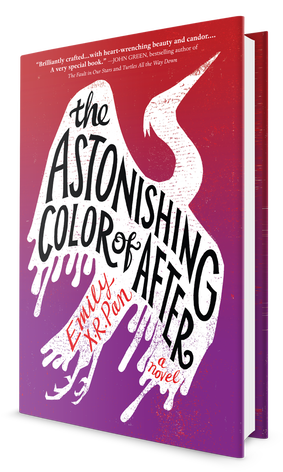 The Astonishing Color of After by Emily X.R. Pan has been on my radar even before it was published in March 2018. The author is a family friend, so I was following every step of her journey from writing drafts to revealing the cover to officially launching the book. It probably should not have taken me over a year to finally read her debut novel, but I am glad that I waited until I was in the right mindset to do so.

The story centers around a teenage girl named Leigh Sanders, who is half-Asian and half-white. The book begins with the death of Leigh's mother. Leigh is convinced that her mother's spirit turned into a phoenix-like red bird. As part of her grieving process, Leigh decides to fly to Taiwan to learn more about her mother's past and meet her maternal grandparents for the first time.

For a YA novel, The Astonishing Color of After touches on several deep and heavy topics. As someone with a personal history with mental illness, I truly appreciate how a lifelong battle with depression is highlighted in the book. Not only are multiple potential remedies –​ therapy, medication, ECT –​ explored, but how the depression affects others, especially family and friends, is also illustrated. Although grief is typically difficult to convey, the usage of colors to describe mood and the surreal time jumps help express the feeling.

It was a delight to read a book that takes place partly in Taiwan since I have been to some of the locations mentioned, like Taipei 101 and the Shilin night market. There are some foods that I only know by their Chinese names, so it was interesting to see how they were described in the book. My Mandarin isn't as polished as it could be, so trying to figure out the Chinese phrases written out in Pinyin was sometimes a struggle. Luckily, it is not necessary to know any Chinese to get the overall meaning.

The ideas of culture and identity are also analyzed, as you might expect with a mixed-race protagonist. Communication barriers is another major theme. Not just between languages, but with the people you are closest to. Family dynamics are examined as well as various types of relationships, ranging from friendship to love.

For me, the book was a fairly quick read. The story was very compelling and pushed me to continue. Even though I am on a mood stabilizer, I still felt myself tearing up during some passages. The Astonishing Color of After is not the best choice if you are looking for a pick-me-up or a light read, but it is definitely worth reading when you have a healthy mentality to devote to it.