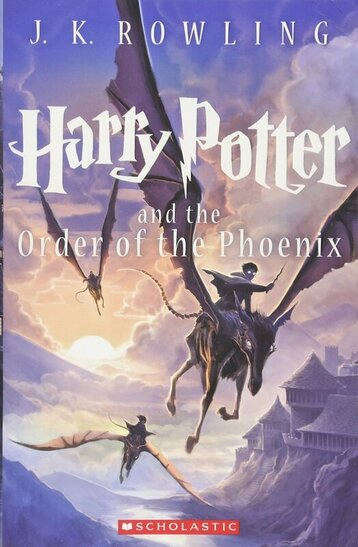 The end of Spring Term also brought us through the end of Book 5!

We worked through Chapter 29: Career Advice starting out with coloring Easter Eggs! Then we talked about career pamphlets and how our own advice sessions would have gone! Prof. Tarma's session got off track a few times (read: the whole time!).

The next chapter, Chapter 30: Grawp, brought about discussions of the centaur herd's attitudes towards wizardkind, as well as whether we felt it was right for Hagrid to bring Grawp to Hogwarts. While we're all understanding of why, we seem pretty split on whether it was appropriate or not.

The last day of March started off our week of Chapter 31: O.W.L.s. We reminisced about the standardized tests we've experienced in real life and then theorized the answer to a History of Magic O.W.L. question!

The first full week of April had us speeding through Chapter 32: Out of the Fire! We considered the legitimacy of Hermione's questioning Harry's "vision" about Sirius (we're pretty much all on Hermione's side here!) and then got ready for the end-of-exams celebration! Prof. Tarma brought several varieties of chips while Sky brought decorations made from recycled exam notes and Prof. Scarlet brought Exploding Kittens!!

Moving on, we guessed at why Grawp might have been looking for Hagrid in Chapter 33: Fight and Flight when he barged into the group in the forest. We wrapped up the chapter with more guessing, this time asking whom Harry, given a choice, would have chosen to go with him to rescue Sirius. We're all pretty sure he would've picked older students, especially ones he knew from Quidditch!

As we rushed to rescue Sirius in Chapter 34: The Department of Mysteries, we stopped for a hot second to draw and discuss things the rescuers passed, such as the hummingbird that captured Ginny's attention, or what the inside of the locked room might look like and how to get in!

The end of April brought us to one of the saddest group of pages, Chapter 35: Beyond the Veil. To take our minds off the terrible event that took place in these pages, we discussed our favorite rooms in the Department of Mysteries, such as the Time Room and the room with all the planets! We also looked at the spell Ron was hit with to see if the effects were reversible.

The month of May started off with Chapter 36: The Only One He Ever Feared. Here we paused for a moment to reflect on things that are much worse than death and then detailed out the actual process for making a Portkey!

In this pivotal chapter, Chapter 37: The Lost Prophecy, we learned the full history of why Voldemort was after Harry and wondered about when the right time for Dumbledore to divulge this information would have been. As part of this, we opened up about the many moral lessons we also learned from this chapter and how they resonated within us.

For our final pages of Book 5, we read Chapter 38: The Second War Begins. We imagined some advice the now Dumbledore-believing Ministry would be offering and also came up with some questions that The Quibbler would publish in one of their quizzes!

That's led us to the end of year 5! We hope to see you back next year for Book 6, Harry Potter and the Half-Blood Prince!