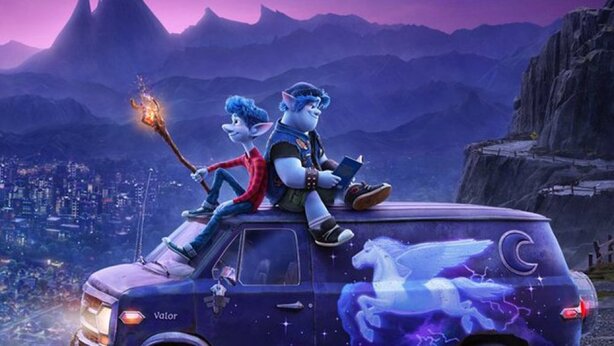 Some would say that the timing of this movie's release was less than ideal, but I would argue otherwise. A few weeks into social distancing with boredom beginning to creep in, Onward was an excellent reminder of the importance of imagination.

Onward takes place in a fantasy suburban town called New Mushroomton. Centaurs, elves, and other creatures all live together as a modern society. Dragons are pets, while unicorns are pests that forage through trash bins. Despite the existence of all these magical beings, magic is now nearly obsolete as it has been largely replaced by technology.

The story begins on the sixteenth birthday of a shy elf named Ian Lightfoot (Tom Holland). Ian and his much more vocal older brother Barley (Chris Pratt) lost their father at a young age. Their mother, Laurel (Julia Louis-Dreyfus), is finally able to give the boys a gift that their dad left for them. It consists of a staff with a rare Phoenix Gem and a letter detailing a "visitation spell" allowing them to resurrect their father for one day.

Unaware of his magical powers, Ian accidentally casts the spell, but only the lower half of his dad's body appears before the Phoenix Gem disintegrates. Barley is positive that there is another Phoenix Gem out there. Drawing on his experiences playing Quests of Yore, a game based on historically accurate quests, Barley convinces Ian to go on a quest together, hopping into Barley's van that he affectionately named Guinevere.

Their first stop is the Manticore's Tavern to obtain a map to the Phoenix Gem. The Manticore (Octavia Spencer) was once a fearless warrior who assisted those embarking on epic quests. At the moment, however, she runs a family-friendly restaurant (similar to Chuck E. Cheese in the United States). An argument with Ian over the map ends with the Manticore inadvertently setting fire to her restaurant. As Ian and Barley continue on their quest, their mother enlists the help of the Manticore to find her sons and to prevent them from releasing a curse.

The main interaction in Onward is between the Lightfoot brothers and the bottom half of their dad. Ian is much more cautious, while Barley sticks to his gut instincts. Barley teaches Ian spell incantations from Quests of Yore, among other skills. It is entertaining to see the brothers fight, support each other, and figure out how to work together effectively.

Hidden or suppressed potential is another important theme. Suffice it to say, Ian is not the only one who discovers his magical abilities. Also, the storyline of the Manticore reminds us to be true to ourselves. Sometimes we get sidetracked trying to scrape through daily life that we don't follow our passions. Finding closure is a heavier topic that is featured in Onward.

Although Onward probably won't be one of my top Pixar movies, it is definitely worth watching. It appears to be another coming-of-age story, but evolves into something much more. The fantasy setting is enjoyable and sometimes completely outrageous, yet still relatable to the real world. There are strong emotional moments mixed in too. Hard to imagine, but a quest never goes quite as planned and what you are looking for might be something else entirely. No matter what, life continues and there is only one way to go... onward!