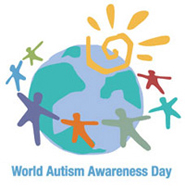 According to the dictionary, autism is a mental condition that is present from early childhood and is characterized by difficulty in communicating and forming relationships with other people as well as difficulty in using language and abstract concepts. In the United States, 1 in 68 children have autism. 1% of the entire world has autism, which forms part of the autistic spectrum disorder (ASD).

And yet autism is more than just numbers. Over 60% of all autistic children have been bullied, because they may act strangely or differently from everyone else. Autistic children are not expected to do much in life: one man diagnosed with autism said he was barely expected to graduate high school, much less college. There are many organizations that promote awareness of autism. Autism Speaks, in particular, supports autistic families and is involved in research to better understand and treat autism.

On November 1, 2007, the United Nations (UN) decided that they were going to take autism awareness and research one step further, by proposing he idea of World Autism Awareness Day, which was subsequently passed.

World Autism Awareness Day was first celebrated on April 2, 2008. This holiday promotes autism awareness and research into better understanding ASD as well as possible cures for autism. All UN members are encouraged to raise public awareness of autism.

To celebrate this holiday for the very first time, a convention of sorts was hosted at the United Nations Headquarters in New York. This convention included a panel discussion as well as a briefing on autism awareness for non-governmental organizations.

Following 2008, every year on April 2nd, autism awareness campaigns happen around the globe. Autism Speaks hosts a campaign called Light It Up Blue. Light It Up Blue is exactly what it sounds like. People are encouraged to wear blue or light up a house or building with blue lights on World Autism Awareness Day. Places all over the world light up blue on this day and people all over the world wear blue to promote autism awareness and show that they care.

The Power of One March is a nighttime march in Washington DC that also occurs on World Autism Awareness Day. This march isn't specific to a single organization. Rather, participants can choose which autism organization to support. This march once again spreads autism awareness and shows autistic people that they are valued.

Autism Ontario has a Raise the Flag campaign, where schools and communities pledge money as well as raise a flag for autism on April 2nd. This is similar to the Light It Up Blue campaign except this campaign also serves as a fundraiser for Autism Ontario.

There are countless ways to celebrate World Autism Awareness Day. Perhaps, on April 2nd, you will Light It Up Blue. Or maybe you will march to promote awareness of autism. Though the Power of One March is only in Washington DC, other marches occur around the world. Perhaps you will Raise the Flag. You might not even do any of these things, but whatever you do, don't forget World Autism Awareness Day.