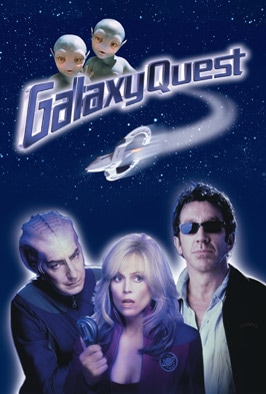 Good parody movies (that are obvious parodies) are few and far between. Great or bad, they are still my guilty pleasure. However, barring one, I doubt there was any parody movie I enjoyed more than Galaxy Quest, a light-hearted comedy that paid homage to Star Trek.

For four years, a crew of NSEA Protector, under the guidance of Commander Peter Quincy Taggart, had been a part of many dangerous and thrilling missions in deep space. But, despite the popularity, the show they were a part of has been cancelled. Even after twenty years, five stars of 1970s sci-fi series Galaxy Quest are meeting their fans in costume, when they are making appearances at conventions. For some, it is a tedious duty, for others, the only chance to relive some of the past glory. However, a group of aliens intercepted the television transmissions and mistook the show for actual historical documents. They enlist the help of the cast against a real war with a deadly foe. With absolutely no clue what they are about to be a part of, the actors have to take on the roles of heroes the aliens believe them to be.

The performance of the actual cast is amazing. Tim Allen as a Captain Kirk-esque character, Sigourney Weaver as a bimbo character, who is only in the show for the looks, and Alan Rickman as the alien scientist give straightforward parallels to the material it parodied, while introducing the rest of sci-fi clichés in a tasteful and playful manner.

Galaxy Quest makes light fun of sci-fi movies and shows especially when it touches on the illogic of the set and writing. This is why one of my favorite scenes in the movie is when Weaver’s character is in hysterics at having to dodge several lethal looking choppers that exist only because they were written into the episode of their show, with no real purpose. "Whoever wrote this episode should die!" indeed.

Star Trek fan or not, Galaxy Quest is a hilarious movie that completely pulls you in with its story, and it is not just a homage, but a pretty solid stand-alone sci-fi comedy as well. You should definitely check it out if you have not already.