A Day Amongst the Muggles
Maxwell Shadow 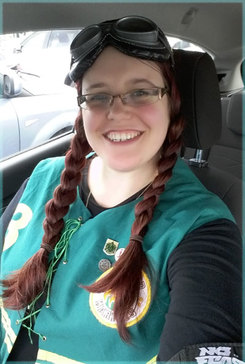 On Thursday 2nd March 2017, the Muggles celebrated World Book Day, a day which really is a dream come true for any witch or wizard who just isn't that good at blending in when they have to get around without their robes. I was lucky enough to get to speak to a family friend who took advantage of the day to go out in public dressed in full Quidditch gear and carrying her Nimbus racing broom proudly. Apparently, a few years ago, a copy of Quidditch Through the Ages was released to the Muggle population under the pretence that it is a work of fiction. Of course the muggles lapped it up with some even starting their own version of the game, forming leagues and holding their own championships. So when World Book Day 2017 came around, which real Quidditch fan would pass up the opportunity to show their team pride? Certainly not my friend (let's call her Li) who went about her day dressed in Holyhead Harpies robes, a team she's supported for as long as she can remember.

Li passed a Muggle driving test many years ago and although she admitted to me she was tempted to fly to work on her broom, she thought better of it and started her day the usual way by driving. She's always been good at not using her magical powers to shorten the queues and quicken her journey to work, but I imagine on that Thursday it was difficult to resist the temptations. She did take the time to snap a quick photograph at the end of her journey and it's good to see how cheery she seems despite being about to start a hard day at work (she is employed in a Muggle school as a teacher which seems like an odd choice for a witch, but she always favoured that over a career as a Hogwarts Professor for some reason).

Her day progressed quite normally, despite the freedom of wearing magic-friendly clothes, and she even managed to keep control when the students were being naughty (naturally!) and didn't once reach for her wand. Many of the students asked her which team she supported and although very few had heard of the Holyhead Harpies, most of them had at least heard of Quidditch and didn't question the fact that she had a broom, a wand, robes and goggles. Her Slytherin pin badge did get a bit of interest, but many students assumed from her robe colour that she belonged to the noble house of Salazar (I must find out if Hogwarts, A History has been released to the Muggles), so didn't really question the choice. I asked her afterwards if she got bored of the questions and she admitted that not nearly enough people asked her about her choice of outfit (or costume as they called it) and not a single one was even close to figuring out that she really is a witch, living her life in secret amongst the Muggles.

She assures me that next year on World Book Day she is going to model a different aspect of the Wizarding world, but won't reveal her plans to me just yet. I suppose I'll just have to wait and see and for now make the most of the second photograph she sent to me when I told her I was writing this article. Happy World Book Day everyone! 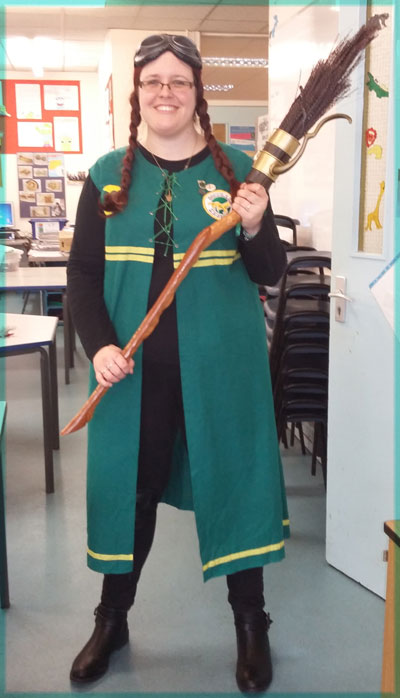