I am on an Assassin’s Creed spree it seems. I recently purchased most of the recent main entries into the franchise and have been playing through them. Although the sometimes-mandatory stealth seemed daunting, I decided to give the titles a try and have not regretted it since. Just over a week ago, I finished Assassin’s Creed: Syndicate, so I've decided to review it.

This particular entry into the franchise came out in 2015, which was made before Assassin’s Creed: Origins, the title I discussed in the previous issue. Since Origins came with a great revamp of most of the franchise’s core gameplay, it was a process re-learning it all, but one eventually gets used to it. 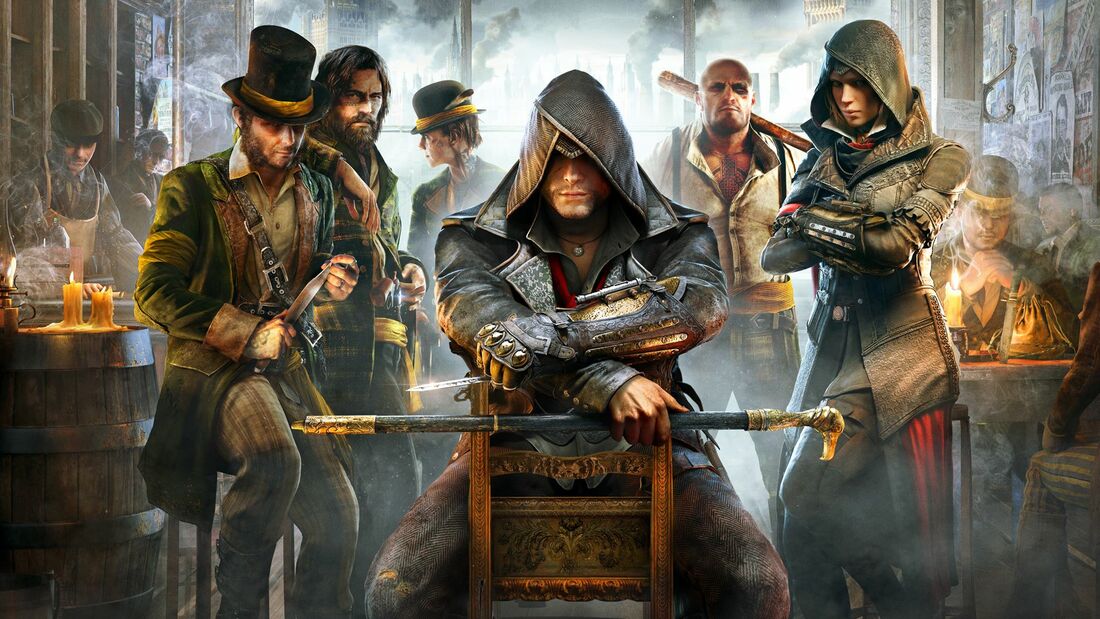 Syndicate is set in Victorian London of the 19th century and is to date the most recent historical setting for the Assassin Era aspect of the main titles. We follow the story of already well-established Assassins, twins Jacob and Evie Frye, who come to London to take back the control of the city from under the hands of Crawford Starrick, a Templar Grandmaster. Both twins are playable characters: Evie has a more stealthy approach and focuses on the recovery of a Piece of Eden, while Jacob prefers to just punch or kill the Templars to take over parts of London. You also get help or interact through main and side missions with several historical figures, such as Charles Darwin, Charles Dickens, Karl Marx, Queen Victoria, Arthur Conan Doyle and Alexander Graham Bell, the latter being my favorite.

While I personally disliked playing a very stealth-oriented character such as Evie, I loved the idea that the gameplay gave you three sets of missions. One set had to be mandatorily completed with Evie, a very serious, by the book assassin, who relies on non-lethal approaches and stealth; the other with Jacob, which mostly consisted of assassinations of famous Templars that slowly crumbled Starrick’s whole operation and the third was “either,” where you could have your pick of which protagonist you would prefer to play as.

The game also gives you an option to run your own gang, The Rooks, who act as your personal “army” when fighting Blighters, a gang in cahoots with Templars, or just whenever you need some back-up. Gang-oriented activities and Templar Hunts were my favorite side activities, which you had the option to complete to get loyalty from your associates and thus, better rewards. Other associate-related side activities were rather boring and had a “go fetch” feel that you sometimes get with big games that just want to bloat the gameplay time. However, interestingly enough, there was no such feel with other character-related side missions, like the Memories, Dreadful Crime stories or anything else that was not associate-related. The latter especially were my favorite side missions, as you had to really think about who might have done the crime and accuse them. It was a nice change from the usual gameplay.

I feel as if the main story, while having interesting missions and engaging story, was way too short. Syndicate has one of the shorter main story plays. Some of the main, as well as side, missions, or “sequences,” also do not have to be played in order, which can become confusing when you get references to things that have yet to happen. Not anything spoilery; it just takes you out of the game for a moment.

What I perhaps loved most about the game though was its DLC, Jack the Ripper, which occurs 20 years after the main game, where you go against one of London’s most notorious and mysterious serial killers. I would tell more, but it would be rife with spoilers and I would want you do be surprised should you ever decide to buy the game.

Assassin’s Creed: Syndicate is tied with Odyssey as my favorite title in the franchise and, while not without its faults, definitely deserves a play.