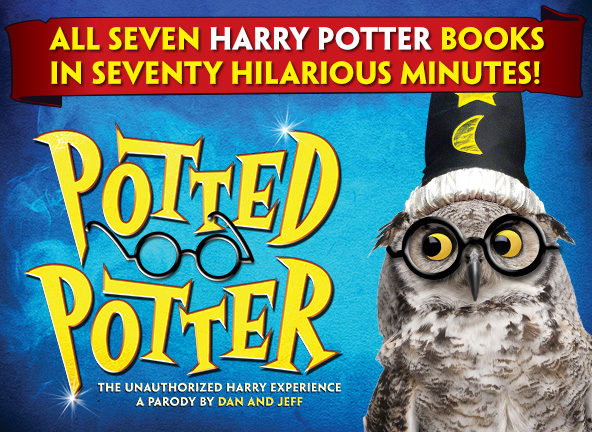 Even if you don’t know the difference between a horcrux and a Hufflepuff, Potted Potter will make you roar with laughter.

When I saw that Potted Potter was coming to the area, it was an easy decision to purchase tickets. Even if I ended up staying at work for an extra two hours, it would still be possible to make the 8 pm show since getting to the theatre did not require a trip to the city.

Potted Potter – The Unauthorized Harry Experience – A Parody by Dan and Jeff or some variation of it has been around for over a decade. It began as a street show by BBC television hosts Daniel Clarkson and Jefferson Turner to keep fans entertained while they waited in line for their copies of Harry Potter and the Half-Blood Prince in 2005. The next year, Potted Potter was developed into an hour-long performance parodying the first six books. Only a few days after Harry Potter and the Deathly Hallows was released in 2007, material from the last book was incorporated into the show.

Potted Potter has successfully toured the United Kingdom and many other countries. After spending several seasons on West End, Potted Potter was nominated for the "Best Entertainment and Family Show" Olivier Award in 2012. The production also made its North American debut in 2012 in Toronto, did a brief off-Broadway stint, then embarked on a tour starting in Chicago.

Walking into the theatre, the first noticeable items were the hoops. The left side had a green and white hoop, while a red and white hoop was attached to the balcony on the right. One of the performers, James Percy, sat on the stage reading Harry Potter and the Deathly Hallows. His co-performer, Joseph Maudsley, was walking up and down the aisles and welcoming everyone to the show.

As advertised, Potted Potter is seventy minutes of pure fun. It really does go through all seven books... with no intermission! With one actor portraying Harry, the other one had to be all the other characters. A different hat typically represented another character, but the props were plentiful! I rather enjoyed the slideshow for the third book. It's my favorite book in the series, so I'm glad they did it justice.

The highlight, of course, was Quidditch! Quidditch was teased every ten minutes or so since it was introduced in the first book. We finally got to play the "real life game of Quidditch" when the Quidditch World Cup came around. Instead of Ireland versus Bulgaria, the match-up was Slytherin versus Gryffindor. Our seats were closer to the green hoop, which meant we were on team Slytherin! Two kids were selected from the first row to be Seekers. Madam Hooch threw a beach ball of the world into the audience. Neither team was very successful at scoring. After two scoreless periods, the Snitch was finally released. The Slytherin Seeker beat out the Gryffindor Seeker for the victory!

Pop culture references and political jabs, which obviously have to be tailored for the region, were scattered throughout. There were nods to various musicals, including Les Miz and Hamilton. After the show, I overheard a girl explaining the significance of Darren Criss to her mother. It is clear that the writers and actors have put in the effort to keep Potted Potter up to date over time. Just a few years ago, Lord Voldemort doing the Floss from Fortnite would not have been part of the show.

It's difficult to say much more without giving away too many of their jokes. Some, okay, a lot were corny, but they all added to the overall performance. As the official website states, "Potted Potter is perfect for ages six to Dumbledore (who is very old indeed)." No Harry Potter knowledge is required, but I'm sure that doesn't apply to you. If Potted Potter goes to a theatre near you, try to go see it!