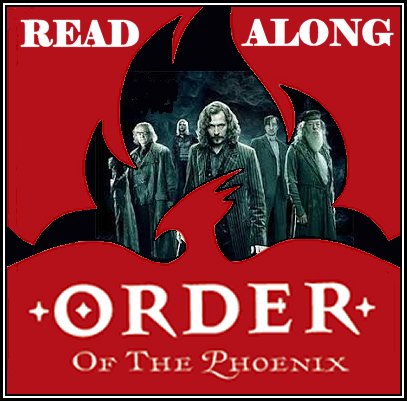 While Spring Term has just started, Read-Along has continued and is over half-way through Harry Potter and the Order of the Phoenix! As always, trivia has been happening and is open to all at any time! Each week we've also had two fun tasks related to the chapter we are on!

Chapter 21: The Eye of the Snake started the little break between Fall and Spring term. We learned about creatures that are equivalents to the Thestral, such as the Soul Birds of Australia. We also described some ways to jog the memory of Harry's first kiss in the future!

Chapter 22: St. Mungo's Hospital for Magical Maladies and Injuries wrapped up January and our short holiday between terms. We discussed the backgrounds of our future portraits – Prof. Scarlet would have a beautiful cascading waterfall with a Snitch flitting around – and also the possible story McGonagall told Umbridge to head her off! Sky Alton had a delightful story of a terrible outbreak of an infectious magical disease!!

Chapter 23: Christmas on the Closed Ward started up our first full week of February! We described possible patterns for Dobby's quilt from Hermione (Shadow posted a picture of a really cool striped square pattern!) and then we listened to the portraits of Healers in St. Mungo's diagnose and offer remedies to Ron. One healer suggested he might have "Venonous NonVeracitude" and that he would need to "Take an infusion of gurdyroots and Veritaserum, steeped in syrup of hellebore, twice a day, at least two hours from a meal."

Chapter 24: Occlumency had us writing heartfelt Valentine's messages as we joined Harry and Cho on their date in Hogsmeade! We also speculated about the three memories Snape deposited in the Pensieve before Harry's first lesson. We're all pretty sure AT LEAST ONE had to do with Miss Lily Evans.

Chapter 25: The Beetle at Bay brought us the news of TEN Death Eaters escaping from Azkaban, including Travers and Spencer Jugson! Turning to the other newspaper, The Quibbler, we discussed the twenty-five ways to "Mingle with Muggles." Prof. Tarma suggested one way might be wearing clothes that are patched and ripped as "pristine" clothes will make you stand out in the Muggle world.

Chapter 26: Seen and Unforeseen showed us everyone's reactions to Harry's interview in The Quibbler, including our own, in the form of fan mail! We also pondered what Snape's response might have been when Harry asked him why he calls Voldemort "The Dark Lord" like the Death Eaters do!

Chapter 27: The Centaur and the Sneak open up March with the discussion of Patronuses! As the DA members discovered their Patronuses, we discussed things we learned about them in a recent Pottermore article, especially Luna's hare Patronus! We also got to experience our first Divination lesson with Firenze and to celebrate we played the quote game!

Chapter 28: Snape's Worst Memory is where we're at now! We're coming up with designs for fireworks to restock the Weasleys' Wildfire Whiz-Bangs collection and talking about our impressions and perceptions of those we glimpsed in Snape's memory!

It's not too late to join in on the fun and earn yourself some scales!!