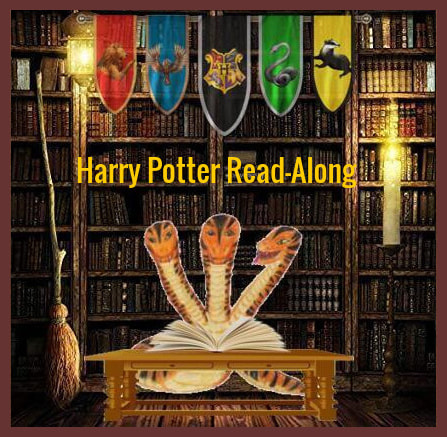 Our Read-Along is continuing to do very well, and during the last two months we've had seven participants, which isn't bad at all! We read one chapter each week, complete two weekly tasks, and answer trivia questions daily. The rewards, other than the enjoyment of reading the Harry Potter novels again and sharing that love with others? You earn Scales! Scales are the Slytherin points system.

The first full week of January began with us reading Chapter Nineteen, Elf Tails, and asking about House Elves and their abilities to Apparate inside Hogwarts. Why didn't Death Eaters take advantage of their skills and use them to get into the school? The general consensus seems to be that they are held in low esteem by most Wizarding folk and would never consider using them for for assistance. For our second question, we felt sympathy for Hagrid, who was spending time with Aragog, and we wondered what we'd read to a dying Acromantula. I was thinking about a novel the Wizarding world would view as fantasy, such as Twilight, while Prof. Tarma Amelia Black would chose something along the lines of Percy and the Pernicious Spider. Prof. Scarlet Leslie-Lewis like Anansi stories (about a character in African folklore who likes to take the shape of a spider). Maxim Trevelyan would read Spider-Man comics, while Polaris Black would share scary spider stories, such as Attack of the Brazilian Wandering Spiders and The Snake-Eating Spider.

The following week in January found us reading Chapter Twenty, Lord Voldemort's Request. For our first question, the task was to come up with a syllabus for a Defense Against the Dark Arts course taught by Voldemort. We listed such coursework as Useful Curses: Avada Kedavra; Learning to Fly Without a Broom; Allies, Servants, and Where to Find Them; and Incapacitation: An Introduction. For our next question, we wondered, “If you were to study Divination, who would you prefer to study under, Firenze or Professor Trelawney?” It seemed to be a toss up, as each was chosen for different reasons.

January's final week week brought us to Chapter Twenty-One, The Unknowable Room. We noticed that while Hermione offers as much help as she can to Harry for discovering Slughorn's memory, throughout the book she seems uninterested in the actions of Draco Malfoy and helping Harry figure out what Draco is up to. The general consensus seems to be that her focus was on other issues and this one did not seem to be a priority. For our second question, we completed the punchline to Ron's joke about the hag, the Healer, and the Mimbulus mimbletonia. February Fortescue, Maxim Trevelyan, and Prof. Tarma Amelia Black took their best shot!

The first week of February found us reading Chapter Twenty-Two, After the Burial. For our first task, we discussed plants that should be collected at a specific time for the best results. This was very informative for those interested in Herbology and Potions, and we received lots of tips for gathering such plants as fluxweed, lavender, sunflower petals, and mugwort. Next, we wondered what we'd do if we were lucky enough to get our hands on a unicorn hair. The answers were unique and ranged from braiding it through one's hair to using it as an ingredient in some experimental Healing potions.

During mid-February we were reading Chapter Twenty-Three, Horcruxes. First, we asked ourselves how you would go about getting information from someone who was reluctant to offer it. The general opinion seems to be to ask questions, to listen, and to pay attention. Being direct never hurts as well. Next up, we asked ourselves What seven objects or animals would you choose if we decided to split our souls into seven pieces to create Horcruxes. Most would select items such as a river rock or a jigsaw puzzle piece, while February Fortescue would instead choose items no one would associate with her or want to destroy, such as King Tutankhamun's Death Mask. Prof. Tarma Amelia Black said she'd simply take her chances in her next embodiment.

The next week in February found us exploring Chapter Twenty-Four, Sectumsempra. Our first question looked at the records Filch kept of the wrongdoers and their punishments during Hogwarts past and we were tasked with coming up with other records of past punishments. Some of the ones we wrote included Prof. Tarma Amelis Black's Hermione Granger being denied library privileges for three weeks for extracting potion materials from Professor Snape's cupboards and Sky Alton's Lucius Malfoy's writing 'Feeling superior does not make me so' 50 times because he sneered  at a professor. Next, we shared our opinions about Moaning Myrtle. Several expressed compassion for her, believing she is miserable and in pain and should receive some sort of assistance in dealing with her situation.

To finish up the month of February,  we began with Chapter Twenty-Five, The Seer Overheard, remembering Ginny's conversation about tattoos Harry and Ron might be secretly wearing and asking about tattoos other characters are probably hiding as well. Some of the guesses ranged from Aberforth Dumbledore and a goat to Sirius Black and a paw print. For our final question, we discussed whether or not Harry's punishment for using Sectumsempra against Draco was too light. Six people weighed in, and there were six different opinions. Maxim Trevelyan definitely thought it was too light and Harry's use of a spell he didn't know what it would do was indefensible. Prof. Tarma Amelia Black felt that Snape and Dumbledore knew that Harry was beginning to understand his responsibilities as a wizard and internalizing what he had done wrong. February Fortescue felt the punishment was too light, but believed Snape had some guilt over having given Harry the Sectumsempra curse, which nearly killed Draco, which somewhat mirrors him giving Voldemort the Prophecy, which got Lily killed. Plus, they had to keep Harry at the school and give him light punishments, because Dumbledore has plans for Harry. Will Lestrange reminded everyone that Draco Malfoy was about to cast the Unforgivable Curse, the Cruciatus Curse, when Harry reacted with that spell. Sky Alton believed the use of Sectumsempra was out of character for Harry. Prof. Scarlet Leslie-Lewis concluded the conversation by adding that the choice of detention was most likely to protect Snape and Draco.

That's it for now! Don't forget, you can still complete Chapter Twenty-Six and the March chapters until March 31st. There's more fun to come, and everyone is welcome to join the Read-Along at any time! See you in the Dungeons.