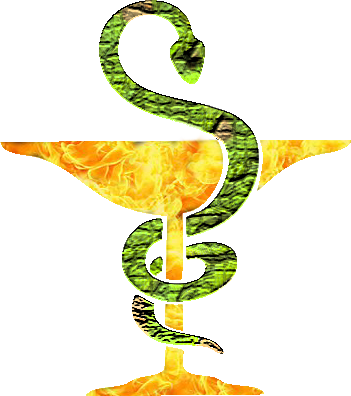 October is American Pharmacists Month! Rather than hissing at everyone to go out and get the flu shot, let's take a look at the origin of the serpentine symbol associated with the pharmacy profession.

Along with the mortar and pestle and the Rx sign, the Bowl of Hygeia – a snake wrapped around a bowl – is used worldwide as a symbol for pharmacy. It is unclear when the symbol was first used to represent the profession. The apostle, St. John, is often depicted holding a bowl with a serpent. There is a story involving St. John being offered a trophy containing poison. The Bowl of Hygeia was present at the 700th anniversary of the founding of the University of Padua in Italy, signifying that the symbol might have been utilized by Italian apothecaries since 1222. These theories lack evidence, however, and the true date of adoption may be lost in history forever. There is physical proof that the symbol has been around for several years though, since the Bowl of Hygeia was depicted on a coin that was minted for the Parisian Society of Pharmacy in 1976.

Hygeia is the Greek goddess of health. She is associated with cleanliness and hygiene. The latter term, in fact, is derived from her name. Hygeia is the daughter of Asclepius, god of medicine, and Epione, goddess of the soothing of pain. Healing clearly runs in the family. Asclepius is the son of Apollo, who has the epithet "The Healer." The Hippocratic Oath, taken by doctors to uphold ethical standards, begins by swearing to Apollo, Asclepius, Hygeia, and Panacea, one of Hygeia's sisters.

Because Zeus feared that Asclepius would make men immortal through his healing, he struck Asclepius with a thunderbolt, killing him. Temples were built for Asclepius. Non-venomous snakes used in healing rituals were commonly found on the temple floors. The snakes appeared dead, but would slither away when they were disturbed. People believed that the snakes were brought back to life through the healing power of Asclepius.

Hygeia tended to the temples built for her father, so she was constantly in close proximity to the snakes. She is depicted with a bowl in her hand and a serpent around her arm. Over time, the bowl has come to represent a medicinal potion and the snake has come to symbolize healing. The Rod of Asclepius – a serpent-entwined rod – is a well-known symbol of medicine and it is only natural that the Bowl of Hygeia complements her father's emblem as a symbol of pharmacy.