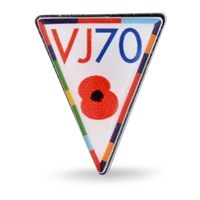 Over the summer, I was lucky enough to be able to attend an event in London to celebrate 70 years since VJ Day. It was a very special day filled with celebration and remembrance, and it was amazing to see that so many other people wanted to join in the celebrations, many of whom did not even know that there was going to be an event taking place that day.

For those who do not know, VJ Day celebrates the end of the Second World War in Japan when the Japanese surrendered to the Allied forces. This event effectively ended the war and is celebrated in the UK on August 15th. This year was the 70th anniversary of this important day, so several organisations associated with the Far East Prisoners of War joined together to make the day one to remember.

During the Second World War, 55,000 people were held captive by the Japanese in the Far East, and many did not survive their three-and-a-half years in captivity. Amongst them was my grandad – Jack Farmer – who was one of the lucky ones who got to go home at the end of war. I never met him – he sadly died when my mum was still a young girl – and it was only a few years ago when my mum was researching our family history that she discovered he had been a POW. Since finding out this information, we have done lots more research and have attended yearly memorial services to remember those who were held captive in brutal conditions. I have also been lucky enough to meet some of the surviving POWs, although sadly age is taking its toll and there aren’t too many of them left now.

In August this year, we managed to get tickets to a special service at St. Martin-in-the-Fields Church in London. My grandma, mum, sister and me, along with our partners, joined many other families in the church where hymns were sung, readings read and speeches made. The one complaint always made by the families of the former POWs is that they don’t get the recognition that those fighting closer to home get and that VJ Day gets much less coverage than the more well-known VE Day. Because of this, we weren’t expecting anything too big from the service, but it was announced at the beginning of August that it would be broadcast live on the BBC along with all the other events that were planned in London later in the day. Also, the Queen was there! The ACTUAL QUEEN! And Prince Phillip, some other members of the Royal Family, some politicians and important military people along with all of us normal people!

The service was both moving and uplifting. The military band was great and everything ran smoothly. We all sang the hymns (we’d had a practise before the cameras started rolling) and I was even on the TV singing one of them (as we found out later). At the end, the Queen walked right past us and Prince Phillip nodded towards me and my sister. After the service, we had to wait in the church for a while as the Queen met some of the POWs, one of whom was a friend of ours called George, who is now 97 and absolutely amazing. Afterwards, George spoke to some reporters while we all had photos taken in front of the church. 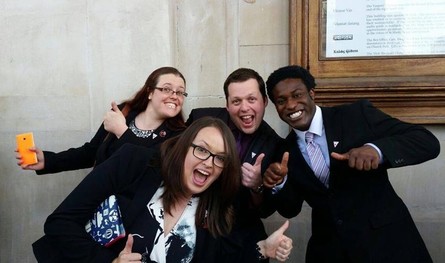 For everyone else in my family, this was the end of the formal celebrations, but for my mum and grandma there was another service to attend (which Prince Charles and Camilla were going to). We were able to watch this on the telly and then join the crowds who were lining the streets to watch the parade. The POWs, their families and the families of those who are no longer with us were greeted by thousands of people applauding them as they walked (or were rolled in wheelchairs) from the Service at Horse Guards Parade to a tea party held in the grounds of Whitehall. I think this was actually my favourite part of the day. We knew what the parade was for, but I imagine many of the people watching didn’t know what was being celebrated. But once they saw veterans with medals, they all started to clap and cheer. My mum said that the veterans were applauded all the way down the route, with many people waving flags enthusiastically, which helped make them feel even more special.

If you’d like to find out more about my day, feel free to send me a HOL message. For more information about the Far East Prisoners of War, there are many websites available such as http://www.cofepow.org.uk/ and http://www.iwm.org.uk/history/what-life-was-like-for-pows-in-the-far-east-during-the-second-world-war.