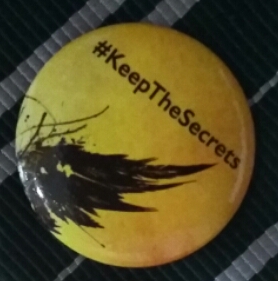 No SerpenTimes edition with the theme of ‘curses’ would be complete without mentioning Harry Potter and the Cursed Child. I have been lucky enough to see the play twice since it opened (thanks to a number of hours spent in the online queue when the tickets first went on sale) and I wanted to share some of my thoughts with you. Please be aware that this review will contain spoilers although I will try my best to keep these to a minimum, after all, J.K. Rowling has asked us to “keep the secrets” and I have the badges to prove it! It’s hard to narrow it down, but I wanted to share with you my five favourite parts of the play. I should probably mention at this point that I have not actually read the script book yet (though my other half did buy it for me a couple of weeks ago and I did look up a couple of quotes in it for this review) so I can’t compare what is written in there with what I saw on the stage, but since the play was created to be seen I hope you’ll forgive me in this respect. If you’ve not read the script or seen the play, now is your chance to close this page and carry on your life in blissful ignorance, spoiler free. Otherwise, read on! 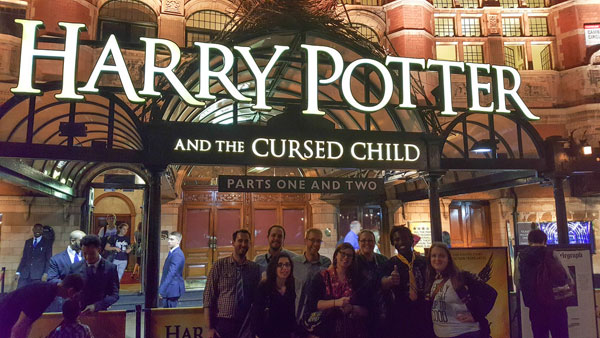 1. The Opening Scene
The stage is open when you arrive at the theatre and the first thing you notice is how massive it is. There are a few props (suitcases mainly) on the stage but that’s about it – not too much to give you any idea about what is to come. Light is shining through a large clock at the back of the stage, projecting an image of a clock-face through the smoke and onto the stage floor, creating a bit of an eerie atmosphere. As the start of the show gets closer train announcements begin to be played into the theatre quietly, building up the atmosphere of being at a station and adding to the excitement of the auditorium. When the start finally arrived (after what felt like hours and hours!) and the lights dimmed I suddenly felt really emotional. I thought it was because I’d been waiting for months to see the show and had built it up so much in my head but I felt exactly the same the second time I saw the play. In fact, knowing what was about to happen, I was even more emotional at the start of the second show and had to fight to hold back a tear!

So, the opening scene has finally arrived and it does not disappoint. All the luggage that was on the stage gets cleared away in synchronised movement, setting the tone of the whole performance where no movement or action is wasted. We get introduced to lots of the main characters very quickly and it’s great to see so many of them and I very quickly forgot the movie actors and these became the characters totally for me. It also helps that the opening scene is almost exactly the epilogue from the end of Deathly Hallows and whilst I really didn’t like this part of the book (or movie) it makes total sense at the start of the play and creates a link from the last book to this play. After all, it is “the eighth story, 19 years later.”

2. Scorpius Malfoy and Albus Severus Potter
Ok so these two are just the most awesome characters. Albus has inherited his father’s sullen nature and sense that the world is unfair. Scorpius is a male version of Hermione but even more geeky; he loves a quiz! From the moment the two meet on the Hogwarts Express you know that they are going to be best mates and we are certainly not disappointed. The two actors who play these characters are fabulous and, like everyone else, totally immerse themselves in the roles. Not only do you believe that they are Albus and Scorpius, you believe the friendship between them and begin, very quickly, to care about them and what they are feeling. Several of my friends, both those who have read the script and seen the play, have spoken about their disappointment that there wasn’t a romantic relationship between this pair and while I can understand what they are saying, it’s made clear from very, very early in the story that they are both straight. Their friendship is what I would describe as a “bro-mance” – they would definitely do anything for each other and, just like Ron was Harry’s treasure in the second task, you know that they would be lost if, for whatever reason, they are forced to be apart. Watching the interactions between these two is a joy, but it is Scorpius who steals the show for me. It will be interesting when the actors move on and someone else has to take on either of these roles as they have very big shoes to fill.

3. Draco Malfoy
I think that most people would agree that Draco from the books is a bit of a disappointment (even more so in the movies). He had such great potential to be a bad-ass and a fabulous advert for Slytherin house, but sadly is always just a little bit weak. Draco in the Cursed Child couldn’t be further from this if he tried. He is passionate and deep, a fully rounded, 3-dimensional character with feelings he, at times, struggles to get across. He doesn’t understand his son but loves him unconditionally. He still dislikes Harry and doesn’t waste any opportunity to put him down and show him up. Harry and Draco have a fabulous duel at one point in the show which Ginny interrupts with the line “I only left this room three minutes ago!” The script book on this occasion just doesn’t do the interaction between the pair of old enemies’ justice. On other occasions I genuinely felt sorry for Draco, something I’d never quite managed while reading the books or watching the films. I wonder if it’s the fresh perspective on his character from writers other than J.K. Rowling, but I really enjoyed the scenes he was in. When Draco reveals to Harry that he wanted to be a Quidditch player when he grew up but just wasn’t good enough, I understood why he wanted so much to be on the Slytherin Quidditch Team that he bought his way in. Little moments like this, acted brilliantly, really did help to flesh out the character and turn him into a real person, helping the audience to see actions from the past in a new light.

4. The Staging
As I mentioned earlier, the stage is vast with very little in the way of props. This is true for most of the show, but the stage doesn’t ever feel empty. A few carefully chosen props really make this huge budget production a success: a portrait frame or door coming down from the ceiling; a table, chair, bed or moving staircase being brought on by another cast member; a suitcase turning into the seats of the Hogwarts Express or a grave; the magical fireplace connected to the Floo network (I could go on forever!). The staircases are perhaps my favourite of all the props and they are used in many scenes to add another dimension to the action, raising certain characters above the crowd or highlighting the distance between others. On top of this the whole centre section of the stage rotates, adding interest to some scenes, a sense of movement for the Hogwarts Express, and a smooth transition from one scene to the next. In fact every scene transition has been so carefully thought out to make the play fast paced and even more magical. A prop is never just picked up and taken off the stage, but instead is covered with the sweep of a cloak and then is suddenly not there anymore. So much practise and care has been put into all sections without dialogue that it really adds to the whole experience. Each of the cast members needs to be as good a mover as they are actor with everyone being perfectly in time with everyone else.

5. The Magic!
No play about Harry Potter would be complete without magic to really make the show special. Some of the effects are simple and easy to work out (which doesn’t make them any less awesome) but others are so fabulous I still can’t figure out how it’s does despite having seen the show twice and looking out for it the second time around. One example of this would be the visitor’s entrance to the Ministry of Magic, which, as anyone who has read the book will know, is through a telephone box. This is used twice during the play to get access to the Ministry and is purely magical. The character, dressed in their travelling cloak, approaches the phone box, reaches out their hand to pick up the phone and dials the number. A voice is heard welcoming them to the ministry and then the cloak is sucked into the circular dial of the phone, the person not there anymore. It all happens so quickly that, although I have theories, I couldn’t tell you how it’s done, where the person goes or indeed when the person goes. The person-shaped silhouette of the cloak remains in place until the cloak is pulled into the phone and the hole is definitely too small for a person to fit through. I will be left puzzling this one for some time, I’m sure, though I have to say I’m pleased I didn’t manage to full work out all the tricks of the show. The magic remains for me, as it should! 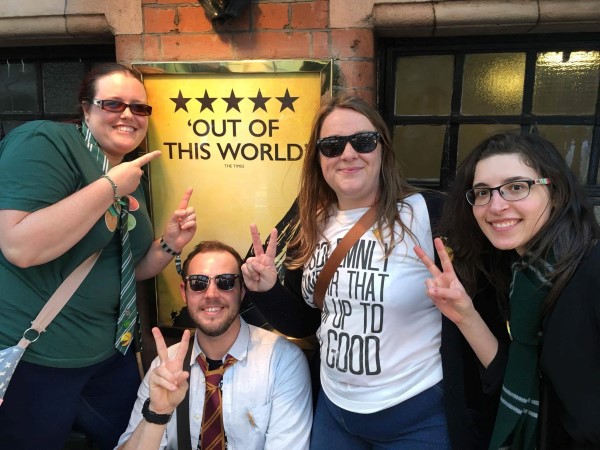