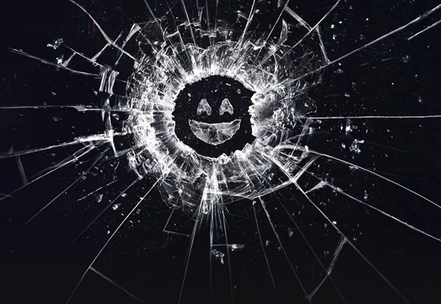 A couple of days ago, my friend and I were discussing television and our favorite programs. After he asked me to list some of my favorites, he mentioned that my list was very British-oriented. He asked me to explain why is that, since most of the shows have a small number of episodes with breaks between seasons, that make waiting for Olympics seem like five minutes, and I did not really have an answer for him except, "They do it right and it is worth waiting for." Which is why, in honor of the season three premiere of one of my favorite shows (after a three-year wait), Black Mirror, I decided to make a review in hopes of attracting people to this wonderful piece of television.

At the beginning, I want to make a point. This show is not, under any circumstance, appropriate for anyone under the age of 18. In fact, this show should not be watched by anyone with a faint heart. It explores disturbing themes of technology and human mind, but they are intelligently shown and give you something to think about.

Anyway, Black Mirror is an anthology show. There are three episodes per season with one Christmas special, each with new actors, a new setting, sometimes a new reality and definitely new problems. The common thread, however, is technology. The show is not necessarily set in the future, with exception of one episode, though it presents you, by the words of the creator Charlie Brooker, "the way we live now – and the way we might be living in 10 minutes' time if we're clumsy."

It is difficult to introduce, however shortly, the plot of each episode, without giving too much away. I went into this show completely blind about what it is, with exception of knowledge that it is about the dangers of technology and has plenty of dark British humor and shock. But I will do my best.

The first episode, The National Anthem, is also considered to be the weakest episode of all. A British Prime Minister wakes up and he is informed that a beloved British princess was kidnapped. In order for her to be released unharmed, he must do an unspeakable act in front of live television. This episode really brings out the question 'Would you rather?' and the ending pretty much takes you by surprise, as does each episode.

The second episode, Fifteen Million Merits, is set in a society where two young lovers see a televised singing competition as their only possibility for escape. Next two, much quieter stories about marriage and love, The Entire History of You and Be Right Back, also my favorites, are equally strong and very much heartbreaking. The first shows what life would be if everyone had a piece of technology implanted in their brain that would make rewinding your memories possible, with the ability to show them to everyone, like a movie. Be Right Back focuses on a service that, based on past communications, lets a young, grieving woman, keep making contact with her deceased husband.

White Bear is, for me, one of the scariest episodes of the show. A woman wakes up in a room, without a memory, with a strange symbol plastered all over television and walls in the house, together with photos of a girl and a man. She finally manages to leave, but is confused when people keep recording her and eventually start chasing her. The last episode of season two, The Waldo Moment is a masterpiece about a self-loathing comedian, who plays a shock cartoon avatar, Waldo the Bear. When he reluctantly runs for political office, as a publicity prank, he discovers to his alarm how easy it is to wreck the system with childish jokes and cheap sarcasm.

I believe that the genius of Black Mirror is how subtly it builds, keeping you from ever questioning the insanity of the premise or any minor plot hole. I heartily recommend it to anyone who thinks they can handle the show. Its third season starts on October 21st and will be available on Netflix!