Game Review: Fantastic Beasts (and how to find them?)
Shiloh Adlar 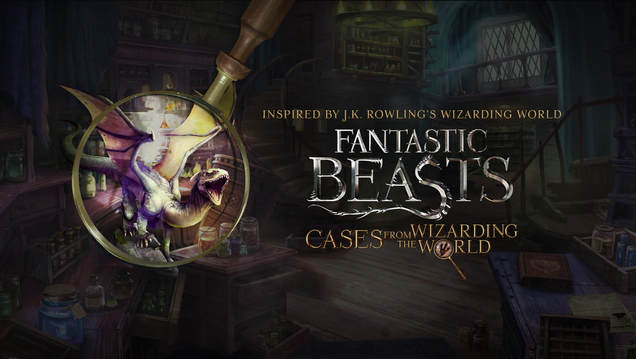 A while back, I discovered a game in the app store of my phone that piqued my interest. I must have been searching for Harry Potter related items because this strange app came up in the search called Fantastic Beasts. I noticed it was under the game tab, so I clicked on it and downloaded it out of pure curiosity, and I instantly fell in love. Given the fact that this issue is all about mystery, it felt like the perfect setting to share it with all of you if you have yet to discover it yourself. I will say that this app was found in the Play store for Android. I am unaware if it is available on iPhone or not.

After I had finished downloading the game, I opened it up while the Harry Potter theme played. I knew immediately it was going to be fun, but I did not realize how addicting it would become. The full title is Fantastic Beasts: Cases from the Wizarding World and it is basically a hidden objects game with a twist.

I am currently on Case 4 and to my knowledge they have added up to Case 14. The game starts by introducing you to your partner who you will be training under in the Department for the Regulation and Control of Magical Creatures. You are immediately assigned a case and you depart to search for clues. This is where the hidden object part comes in. During certain scenes, you will find special hidden objects to open up new tasks to perform such as items to repair, clean, or unlock (yes, you will get to use your charm knowledge in this game) or people to interview.

Each case, except the first one, has four acts to complete. Like most games you download on the phone, there is an energy bar. You spend energy to search the scenes for hidden objects and when that energy is gone, you must wait for it to restore. On top of the energy, as you play the scenes, you will earn stars. Each scene has five stars that coordinate to five different levels of difficulty. These stars are what allow you to perform the tasks mentioned previously.

Eventually, as you proceed in the case, you will discover clues and these are added to your clue sheet. When you have found enough clues, usually by Act 3, you will have to solve the case of which beast was involved. You will usually have three beasts to pick from, and each one has a description for you to pair up with the clues you have found. Once you have chosen right, you must now go to Act 4 and complete the finishing touches. These may include helping the beast with medical attention or obliviating the muggles who happened to see the beast. After all, we cannot let muggles know magical creatures exist. That would be breaking the law!

As I said earlier, there is a twist to the hidden object game besides the cases. There are extra levels that you gain access to when you earn enough stars for that case. These levels include mirroring the scene so everything is opposite from what it was, including the list of objects you have to find! There are also scenes where you must find the difference and scenes where you have to find as many objects as you can within 30 to 45 seconds depending on which of the five stars (levels) you are currently on.

After you have finished solving a case, another category called Beast Quests opens up for you to complete within that particular case file. These can include finding four objects within five seconds, completing a scene on a certain day of the week, completing five scenes in less than 22 seconds, and so on. Once you have done the same scene so many times to earn those stars and experience points, the Beast Quests become quite simple. I have memorized most of where all the objects are, and after that, I just tap as quickly as I can.

I highly recommend this game if you are looking for something fun to do in your spare time or even as a way to exercise your brain. Hidden object games are great for that. If you do happen to check it out, let me know what you think! I would love to get your opinions as well!