That time I got to high five Cedric Diggory
Prof. Scarlet Leslie-Lewis 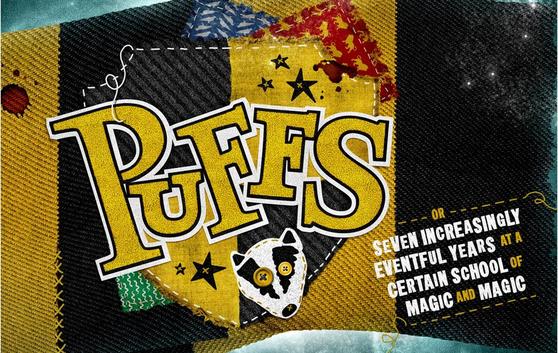 There are times when I forget to take advantage of my vicinity to New York City. But being close enough to the city makes a "Let's go see Puffs!" whim become reality without too much planning.

Although I was the one who suggested going to see Puffs, I honestly did not know much about the play. All I really knew was that it involved Hufflepuffs. The full name of the play is Puffs, or: Seven Increasingly Eventful Years at a Certain School of Magic and Magic. It was developed in part during a residency with the University of Florida School of Theatre + Dance. Puffs was written by actor and playwright Matt Cox. It was originally produced at The Peoples Improv Theater in New York City by Stephen Stout (who portrays Ernie Mac in Puffs) and Colin Waitt. In October 2016, Puffs moved to the Off-Broadway Elektra Theater. This past summer, Puffs relocated again to New World Stages, its current Off-Broadway location. The play is directed by Kristin McCarthy Parker and produced by Tilted Windmills Theatricals.

Before I get into the play, I have to say I was extremely impressed by the theater. I would love to see another show there in the future. New World Stages has a modern and sleek design. It is the home of five theaters with 199, 350, or 499 seats. The Green Room, a bar and lounge, is located downstairs along with the theaters. Drinks are allowed in all the theaters at New World Stages. In fact, each show even has a few signature drinks for sale. For Puffs, there was Puffs' Mead and non-alcoholic Puffs' Butter Brew. Puffs was in the smallest theater, so when I was purchasing tickets, I simply picked "best available." I figured any seat would be fine in such a small theater. Turns out I was slightly wrong about that, but more about that later... We ended up getting seats in the first row!

Puffs tells the story of Wayne Hopkins, a boy from New Mexico who discovers he is a wizard. He is sorted as a "Puff" by the Sorting Hat, which looked like a large cloth version of a paper fortune teller. Wayne forms a trio with Oliver, a Muggle-born math genius, and Megan, who believes her Death Eater mother will come get her any day. They are in the same year as the Hufflepuffs we all know and love - J. Finch (Justin Finch-Fletchley), Ernie Mac (Ernie Macmillan), Susie Bones (Susan Bones), and Hannah Abbott. Of course, you can't have a play about Puffs without the magnificent Cedric Diggory! We follow the adventures of the Puffs through their seven years (plus nineteen years later) at school, in a mere hour and a half.

The company comprised of eleven actors and actresses. They each portrayed a Puff, but they all had at least three other roles in the play. There weren't many elaborate costume changes - donning a red robe would mean the character is now a "Brave" and ghosts always wore a pie frill. The set was also quite simple. There were four doors and occasionally a "rorrim driew" neon sign would be lit if a certain magical mirror was part of the scene. But the play wasn't restricted to the stage. The right aisle had some paintings and was used for a scene or two. Voldemort delivered an important announcement from the balcony.

Along with a great view of the stage, first row seating came with a few additional perks. When the dementors arrived for third year, the narrator handed out chocolate. Sadly, we just missed out on that, but I think it was because a kid was sitting two seats away from me. That was completely made up for during "the year that Puffs mattered." Cedric was chosen to be a Triwizard champion! He celebrated with all the Puffs, then came to the edge of the stage, so I got give him a high five! I also liked the scene with the golden egg because we got blasted with bubbles. After a death, the narrator gave the first row tissues - Puffs brand, of course.

Even though the play went quickly, the story was fairly easy to follow since it does parallel one we are already very familiar with. There were a few touching moments here and there, but overall, the play lived up to its main selling point as a comedy. You definitely have to be a Harry Potter fan to truly appreciate all the jokes. References were made to the Dumbledore actor change and the decision for all students to wear regular clothes in the movies. The overdone "serious-Sirius" line was practically delivered with a groan. The prop for book 5 was gigantic compared to the other books. After throwing out some Cursed Child remarks, J. Finch reminds us that Harry Potter and the Cursed Child will be on Broadway in the spring at the end of the play.

If you are ever in New York City, especially with your fellow Harry Potter fanatic friends, you should add Puffs to your itinerary!