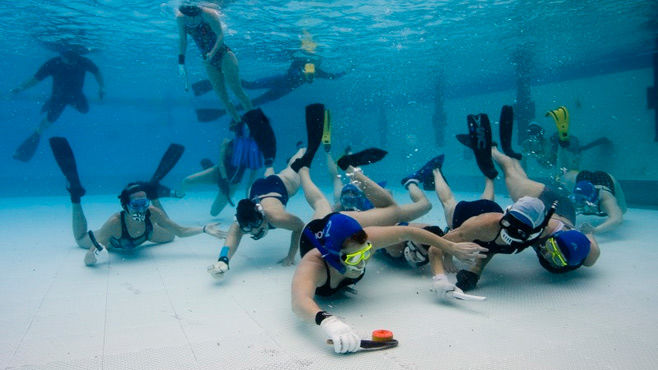 When I look back on sports that I have covered, I find the list is quite lacking in aquatic, or rather, purely aquatic ones. So, to even the playing field a little bit, I decided to cover Underwater Hockey, in some parts of the world also known as Octopush. It is quite similar to ice or grass hockey, except all game is played purely underwater.

This particular sport was invented by Alice Cleverly in 1954, a founder of Southsea Sub-Aqua Club, where she introduced it to other co-founders. She wanted to keep the members of the club interested in winter months, when almost no one wanted to dive in open-water, due to the cold. The origin of the name comes from the team originally having eight players (octo), who had to use a bat (called 'push') to push the lead puck into a goal. The first official competition between teams was held in 1955, where clubs from Southsea, Bournemouth and Brighton participated, with Southsea being declared winner. Now, underwater hockey is enjoyed on the continents of Australia, Europe, Asia, Africa and North America and it is still gaining popularity.

Teams are consisted of up to ten people, but only six players play at any time. Before the start, the puck (lead and lined with plastic) is put in the middle of the pool, with players in the water and touching the wall above the goal they are defending. When the buzzer or gong sounds, players are free to move anywhere in the play area to try to maneuver the puck in the opposite goal. Players do not have a breathing apparatus, they actually hold their breaths, so they must have some experience in free diving. Game is played until a goal is scored, when the players have to return to their wall to start a new point or a referee signalizes a break. The match is broken into two halves, ten to fifteen minutes each, except in World Championships, where the one half is twenty minutes long.

Speaking of World Championships, they are usually held every two years, first being in Vancouver, Canada, where five nations participated. Biggest participation so far has been in 2013, where 19 nations competed for the title. Current underwater hockey World Champions are Australia (Men Elite, Men Master and Women Master groups) and South Africa (Women Elite).

Now, you are probably wondering, but if it is all underwater, what about the spectators? It is true, underwater hockey in not the most friendly sport when it comes to that. In games on a smaller scales, spectators are welcome to don swimwear and snorkels and join the players in the pool. When it comes to bigger championships, pools either have underwater viewing areas or live footage from underwater cameras by very talented videographers.

If you are interested in the sport, join people in Quebec, Canada between July 19th and 28th for the 20th World Championship!