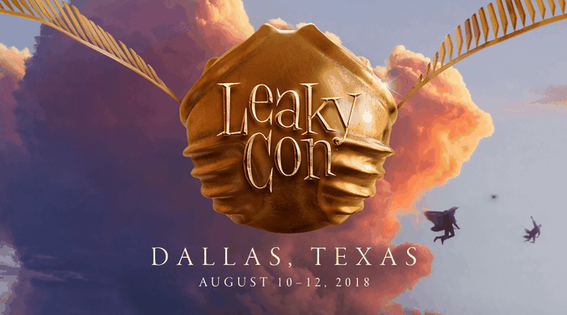 If you have never been to LeakyCon before, you are really missing out. I was lucky enough for it to be hosted only a few hours away from where I live, so I immediately bought a pass to go. It was the best experience ever, and thinking about it almost makes me tear up because I miss it so much.

I got there very early the first day to register and the lines were already long. I knew exactly what I wanted to do when I got inside and that included some incredible panels with actual Harry Potter cast members. I won't go into detail about all of them because there were only a few that really stood out to me.

My favorite panels that I went to with cast members included Alison Sudol's and Dan Fogler's solo panels and their combined panel (Queenie and Jacob from Fantastic Beasts), "The Antagonist" panel which included the actors who portrayed Viktor Krum, Blaise Zabini, Pansy Parkinson, and Percy Weasley, as well as Chris Rankin's solo panel (Percy Weasley), and "Me Dad's a Muggle" with Devon Murray (Seamus Finnigan).

The solo panels with Alison and Dan were incredible. Alison is so soft-spoken, but at the same time has a relatable personality, while Dan is a huge comedian and very outspoken, constantly running jokes. In their combined panel, I could really tell how much chemistry they had, especially in a segment where Alison said that it was a sore spot for Dan that he didn't get a wand. Melissa, the host of the panel, said that they would go to the marketplace and get Dan a wand, to which Alison immediately replied, "Don't get him a wand! He’s a No-Maj." But then Dan looked sad, so she added, "Queenie loves Jacob just the way he is," and of course he was happy again.

They talked about their experiences being cast and how Dan had dressed up with a sort of Charlie Chaplin look for his audition and callback before the director told him to stop. Alison talked about how she had to develop a voice for Queenie because of her saying "ain't" all the time and it not sounding right in her own voice. She said she worked with a dialect coach for weeks only to be told to drop the dialect and go back to how she was originally doing it.

There was also a moment where Alison almost gave away something from Crimes of Grindelwald and where Dan just about did by saying that Queenie and Jacob get back together, and Alison replied, "Maybe! They maybe get back together."

Chris Rankin was also very relatable in the way that he spoke. He is a Ravenclaw, which made me very happy and in his panel he spoke about Percy and what he really felt about him. His biggest concern was that people see him as an antagonist, but Chris felt that Percy had to try so hard to keep up with the likes of his older brothers. That maybe he really wasn't as smart as people thought him to be. He just had to work so hard because he wanted a place in his family. He kept trying to make the right decision and by the time he realized it was the wrong one, he was stuck and it was too late until the Battle of Hogwarts where he decided he could make things right. I really liked his reasoning for this character, and it makes me see Percy so differently now, partly because I relate to some of what he said (more on that in a later issue).

I don’t have much to say about Devon Murray's panel except that there was a point in time where Devon stood up and where Melissa stood up to walk offstage because they couldn't stop laughing due to a joke that turned really sour and that they just couldn't give up. In other words, the entire ballroom was in fit of laughter. I will tell you that it was about wands and you can figure it out on your own from there. He's truly a remarkable character (and has a love for horses, which he rides everyday). In fact, he ended up getting hurt while riding one day during the filming of one of the movies and it is a big reason as to why Seamus is barely seen in that one!

There were also panels on spellwork and Latin which I went to as I took Latin throughout fifth grade to high school. The use of language was brilliant in the books and there was a great discussion on why the spells were developed from Latin, which was due to the English language and many other languages being derived from Latin.

There were a lot of Harry Potter related events, including a performance by Team StarKid, which was AWESOME; a wizard rock concert that included Harry and the Potters, the Mudbloods, Tonks and the Aurors, plus others; Snitchwiches (which sadly I didn't get to try because they're not vegan); Butterbeer (also not vegan and the line was insanely long); and Quidditch on broomsticks in the back of the marketplace, (no I didn't actually participate, but it was cute watching the kids have fun). They also invited marginalized authors of young adult novels, which in turn featured marginalized characters. These included Julie Murphy (Dumplin'), Kheryn Callender (Hurricane Child), Nic Stone (Dear Martin) and Mindy McGinnis (Given to the Sea). While there were other authors there, these were the four in the panel that I went to about young adult literature and using it to make a statement. This panel was another favorite of mine, and because of it, I went to the library when I got home and put a few new books on my to be read (tbr) list. These authors were in full force about making a change and difference in the world and spreading ideas and awareness about whatever issue they fight for or against, and it was beautiful listening to them talk.

Another one of my favorite panels (going back to Harry Potter) was "So You Think You Want to be the Next Newt Scamander?" This panel was all about magical creatures and, let me say, part of this panel was a trivia game to earn buttons. The questions were all magical creature related and since I assist Care of Magical Creatures and am on the Ravenclaw Quidditch Team, I knew every single answer and I think people may have thought I'm slightly crazy. This panel was ran by the founder of the Protego Foundation, a group that works to help animals, magical and Muggle alike. They are also working on getting Universal Studios to make a vegan butterbeer! How cool is that? I even was able to share with Tylor, the founder of Protego, my column from the Alte to give him some HP inspired vegan recipes. And of course there was that discussion on why centaurs were classified as beasts instead of beings. I definitely know the answer to that one.

One last story. My wand.

The marketplace was full of merchandise, and I eventually bought a Ravenclaw cardigan, which yes, even in the Texas heat, I have been wearing every day (I've washed it, I promise). However, on Saturday, I went to check out a wandmaker. He handcarved all of the wands and even put the core in right in front of the person who purchased one. I picked up a wand that had pink streaks through it because let's face it, everyone knows pink is my color. We started talking. He asked me if I knew what wood it was. I told him that I didn't. He asked me if I remember the story of the three brothers, and I told him that of course I did. He then asked what tree Death created the wand out of, and I told him elder, only for him to say that I was holding an elder wand. I immediately put the wand down and told him that it seemed a bit too powerful and dangerous for me. I told him that I would be back on Sunday after checking what my actual wand wood was.

So I took to Pottermore to find out the wand that I had been given when I signed up for it years ago. I discovered that I had gotten a sycamore wand with unicorn hair as the core. On Sunday, I went back to the man who remembered me immediately. I told him what I found out my wand was and he said that he sold out of the sycamore early Saturday, however, he did have a wand that had sycamore as part of it. He reached over and grabbed a wand off the table, and it was one that had two woods, one wood for the shaft and one wood for the handle. The shaft in this wand was sycamore. He handed it to me, and I noticed the handle had the pink streaks in it like the wand I had picked up the day before. I looked up at him and he said, "Yes, that’s the wand you had picked up yesterday. The handle is elder and the shaft is sycamore." In other words, my wand actually chose me.

He filled it with unicorn hair (a special sparkly string that looked like unicorn hair, but no, it's real, I promise!), and sealed the bottom before placing it in a blue velvet bag.

I was concerned about the elder part, but when I looked up the meaning online, it actually is great. Ollivander says, on Pottermore, that the elder wand usually chooses a witch or wizard that has been given a special destiny. I like to think that I have a special destiny in store for me, and that's all I need to know.

Needless to say, LeakyCon will be coming back to Dallas in 2019 as well as Boston, and my tickets are ready to go. Are yours?