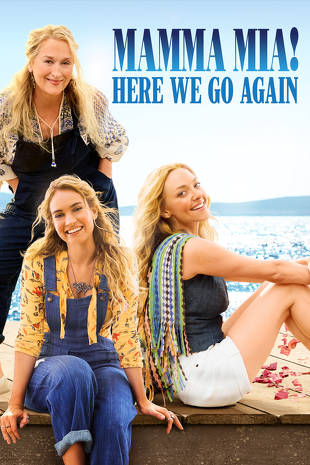 While not really a big fan of musicals (either on stage or on the big screen), I really loved the first Mamma Mia! movie. I am a big fan of Meryl Streep and several other actors, so I felt I should at least give it a chance. Another plus was that they picked the most famous ABBA songs, all of which I really liked. Due to the previous movie’s success, it was inevitable that a sequel was in the works and a few months ago, the world was introduced to Mamma Mia! Here We Go Again.

I was skeptic about the movie ever since its trailer first came out. I thought that Lily James was not really the best fit for Young Donna, nor other actors for their counterparts. I thought that song selection would be less impressive, seeing that most of the best ABBA songs were already in the first movie and I looked forward to the end credits and Cher's performance. It seemed that the movie managed to turn my expectations on their heads by doing everything almost exactly opposite as I imagined.

I felt that the story, despite being heart-warming, was a little lackluster and empty. At the start of the movie, we see that Sophie is rebuilding the hotel on the Greek Island after the death of her mother. The movie changes between the present, where Sophie is faced with difficulties and her pregnancy; and the past, where we find out young Donna’s travels, her arrival on Kalokairi, meeting all three young men, getting pregnant, and giving birth to Sophie. In my opinion, I think the story would flow much better if it was only set in the past, without all that jumping between the two times.

We see some people from the first movie return: Amanda Seyfried as Sophie, Dominic Cooper as Sky, all three of her possible dads and her mom’s best friends. Lily James, exceeding all my expectations was perfect as young Donna. She played a young, happy flower child, travelling the world after graduation. James also has an amazing voice, far surpassing that of Seyfried. Jessica Keenan Wynn, who played young Christine Baranski, also did an excellent job; in fact, I had trouble distinguishing between the two actresses, she was that good. On the other hand, all the scenes with young Harry, especially the first one were just awkward and the secondhand embarrassment was real. The other performances were nothing to write home about, as they were decent.

The songs. Some of them make a comeback, namely Dancing Queen, Super Trouper, and a horrendous rendition of Waterloo in Paris. The other songs on the soundtrack consist mostly of ABBA's less known works. There are many more songs in this movie, but I think they were rather singular and repetitive, as there were a lot more power ballads in this movie. I missed the diversity of the first movie's picks. I also have to admit that I was disappointed with the credits finale. I think Super Trouper was a miss as an ending song and I enjoyed the previous movie's Waterloo much more.

My favorite part of the whole movie, though, was Cher's breath taking performance of Fernando. She took all the attention away in every scene she was in and it was fun to watch her play a Vegas diva who decided to be a present and most of all, good, (great-)grandmother.

Overall, Mamma Mia! Here We Go Again is a fun, light-hearted and enjoyable movie, especially if you love either ABBA, musicals, or both. Whenever you need a pick me up, just put this movie on and you will forget your troubles for a while.