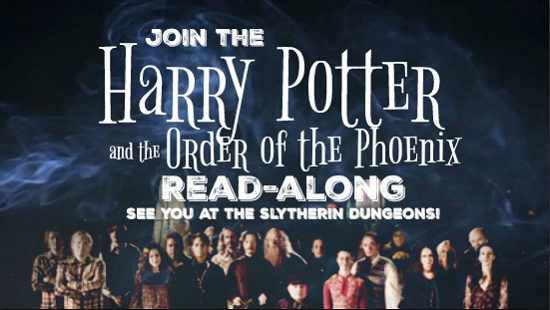 It's great to be back for another year of school and a new book to read-a-long!! This year we are working our way through Book 5, Harry Potter and the Order of the Phoenix!

September started off the book with Chapters 1 through 4, and then October has so far brought us Chapters 5 and 6! As always, we've had weekday trivia posted, with FOUR people answering every question correctly for the month of September!! Remember, you can join in at any time to earn yourself some scales (Slytherin's points system) for trivia and the activities!

The first week of September we started with Chapter One: Dudley Demented! We came up with jingles for Fruit 'N Bran (Sky had a clever one, though it doesn't make it sound very enticing...) and talked about the effect the Dementor attack had on Dudley's life.

We moved on to Chapter Two: A Peck of Owls, and shared some fun malapropisms and proverbs from the series (Tarma shared when Arabella Figg says "...might as well be hanged for a dragon as an egg..."). We also colored in pictures of three of the owls who delivered letters to the Dursley household before moving on to Chapter Three: The Advance Guard.

In Chapter Three we talked about spells and potions that would help us change our appearance like Tonks (Iverian knows the "mutatio capillus" spell which would change her hair!) and we drew/talked about diagrams of the flying formations (Vanessa Tilley drew some cool images that represented each person!)

We ended September with Chapter Four: Number Twelve, Grimmauld Place. Here we speculated on the bizarre objects found in the House of Black (like Prof. Scarlet's cool Runespoor candelabra) and described/shared pictures of members of the Order of the Phoenix and what they do for the Order (Polaris informed us on Krystal Ball, who "informed [the Order] of all the worst magical-Muggle collisions and how they were explained away. She also informs the Order of how complaints about magical creatures were handled and whether new magical creatures were bred.").

October started off with Chapter Five: The Order of the Phoenix. We first discussed instances where magic may make a situation more difficult (Sky brought up the good point where putting clothes on with magic might have "spectacularly wrong" effects!) and then we talked about some of our proudest accomplishments (like Dumbledore getting on the Chocolate Frog Cards) that we wouldn't want taken away!

We then moved to Chapter Six: The Noble and Most Ancient House of Black. Here we speculated about ingredients in the Weasley twins' products, especially wondering if any of the ingredients came from Sirius Black's family house! We also did some research on the Black Family Tree as well as showing off our own family tapestries!

That's it for now! Don't forget, you can still respond to Chapter 5 and 6's tasks until October 31st and there's more coming up! Everyone is welcome to join at any time!