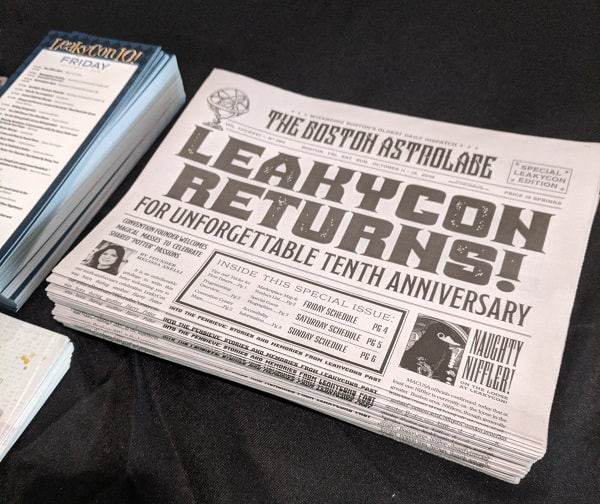 The rainy and windy weather did not deter the masses of fans attending LeakyCon in Boston. What exactly is LeakyCon? LeakyCon is a three-day convention for Harry Potter fans. According to LeakyCon founder, Melissa Anelli, the goal is to "make LeakyCon the greatest place on Earth for a Harry Potter fan to be. It should be a place to be your most magical self, free from fear, doubt, or ridicule related to your fandom." This particular LeakyCon was extra special because it was the 10th anniversary. The first ever LeakyCon in 2009 was also held in Boston.

It is immediately clear that you are in the right place because everyone is either sporting their House colors, donning Harry Potter-related apparel, or going all out in cosplay. There was a couple dressed as Arthur and Molly Weasley. Later on, they met another pair dressed as Fred and George, which resulted in a lovely Weasley reunion. There were quite a few Beauxbatons students. Hagrid came prepared for the rainy weather with his pink umbrella. Rita Skeeter had her obnoxiously bright lime green coat. There was even a lady dressed as a Remembrall. Somehow Jacob Kowalski attended LeakyCon too!

We hit the Marketplace early, seeking out all the wand vendors. They had everything you could possibly imagine for sale. In addition to the usual scarves and shirts, there were also House-specific candles and soaps. Some artists were even taking commissions. The Snitchwich stand was in the middle of the Marketplace, which caused traffic jams when it was up and running. I seriously contemplated getting a Time-Turner, but I don't wear necklaces often. In the end, I'm happy with my lovely blue wand... Not quite as happy as Cody is with his wand, even though his is extremely similar in style to Voldemort's wand.

The first panel we attended was about Quidditch. It was really interesting to learn about patterns I had overlooked and hear deeper analysis of the Quidditch sections in the Harry Potter series. After that was the Slytherin meetup! Each House had their own meetup. As you can probably guess, the Slytherin meetup got a little rowdy as everyone wanted to express their views and opinions. Cody later showed Slytherin resourcefulness when he led me to seats closer to the stage for the Louis Cordice (Blaise Zabini) interview.

For trivia, we joined the Wrackspurts, which consisted of couple LeakyCon veterans and a fellow Slytherin. The first round was all about Quidditch. We only had trouble trying to figure out how many years Harry played in all three Quidditch matches at Hogwarts. Round two was identifying Fantastic Beasts, like Cornish Pixies (freshly caught), based on sound clips from movies. We then had to identify potions from a list of ingredients. I knew the Draught of Living Death right away thanks to our Welcome Activity in the Dungeons! Round four gave us the most trouble. I think part of it was because many questions were from Book 7 and that's not until next year for Read-Along. General knowledge was the last round with questions worth between 1 and 3 points. They had planned six rounds, but we were running late and everyone was eager to get to the Wizard rock concert.

We were only at LeakyCon for a day, but it was definitely a fun experience. It felt amazing to be surrounded by so many fellow fans and to hear both familiar and new debates about the Wizarding world. The next LeakyCon will be in Orlando. There will likely be additional perks due to the proximity to Universal Studios. Will you be making the trip?