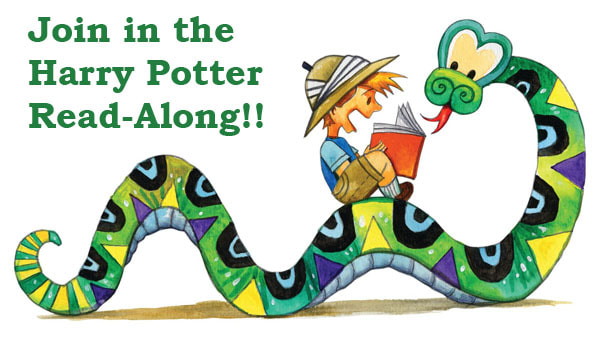 Welcome to the Autumn term! This year our Read-Along has begun with Harry Potter and the Half-Blood Prince.

Our Read-Along is off to a great start and we've over thirteen participants so far (I think thirteen is a lucky number, don't you?). We read one chapter each week, complete two weekly tasks, and answer trivia questions daily. The rewards, other than the enjoyment of reading the Harry Potter novels again and sharing that love with others? You earn scales! Scales are the Slytherin points system.

During the first week of September, we began with Chapter One, The Other Minister, and discussed why Rowling chose to begin the book from the viewpoint of the Muggle Prime Minister. Our second question speculated who the Minister was waiting on a phone call from, and wondered what they were going to discuss (Arianna Stonewater had a really good answer: she thought it could be from American President Bill Clinton, who was up for re-election! Sounds plausible to me.)

The second week found us reading Chapter Two, Spinner's End, and trying to figure out why Voldemort sent Peter Pettigrew to assist Severus Snape at his home during the summer. We next wondered why Snape was very kind to visitor Narcissa Malfoy, but enjoyed taunting Bellatrix Lestrange. The general consensus seems to be that Snape and Bellatrix had very different personalities, while he could relate better to Narcissa.

September's week three had us enjoying Chapter Three, Will and Won't, and asking why Dumbledore left Harry with the Dursleys instead of the Weasleys or even a different Wizarding family. Prof. Tarma Amelia Black and Maxim Trevelyan led the way in discussing blood wards and Lily's love for Harry. Phoenix Hale mentioned that Dumbledore's main focus was the greater good, and not Harry. Next, we were tasked with creating two security questions, and one security answer. I can only imagine what question would go with Will Lestrange's two noughts, five ones, and a two!

For the final week of September, we read Chapter Four, Horace Slughorn, and pondered the question of how to stay out of the the war by avoiding the Death Eaters. For our next fun task, we choose some knitting patterns we believe Dumbledore would enjoy. I think Dumbledore would love any of them! Myself, I'm crazy about the Hogwarts-themed knee socks Polaris Black discovered.

October arrived, and we kicked off the month by examining Chapter Five, An Excess of Phlegm, and wondering who we'd get along with best: Fleur Delacour or Nymphadora Tonks? It appears that different people are fond of different characters, while others don't have a preference. Who would have guessed? We next discussed what Fleur was referring to when she said Beauxbatons had their exams after six years of study, and after that.....?

For the second week in October, we arrived at Chapter Six, Draco's Detour, and discussed how, if we were Hermione Granger, we would get Borgin to tell us what object Draco Malfoy was so interested in. Several had some really good ideas, while others, such as Phoenix Hale, believed Hermione would most likely be kicked out of the shop anyway. For our next task, we got to create an ad for a product from Weasley's Wizard Wheezes!

We've next moved on to Chapter Seven, The Slug Club. For this week, we're asking about the theme of popularity and how it affects the characters. For our concluding task, inspired by the psychedelic spectacles given away by The Quibbler, we get to dream up other possible “free” giveaways found in other Wizarding magazines.

That's it for now! Don't forget: you can still complete Chapters Five, Six, and Seven until October 31st. There's more fun to come, and you are welcome to join the Read-Along at any time! See you in the Dungeons.