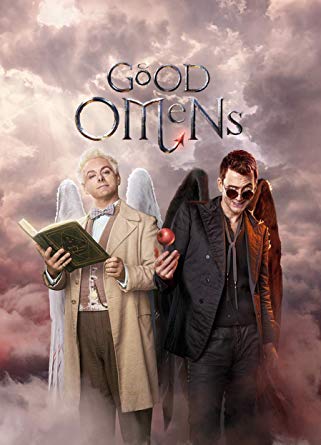 I was looking forward to the Good Omens show ever since it had been announced. I read the book a few times and I consider it as one of the greatest collaborations between authors in history. Good Omens, originally written in 1990 by Gaiman and Pratchett, released on May 31st on Amazon Prime, although it will also be widely released in late 2019. The TV series follows the shenanigans of angel Aziraphale (played by Michael Sheen) and demon Crowley (played by David Tennant), agents of Heaven and Hell on Earth and, thus, its biggest celestial fans, as they seek to prevent the occurrence of Armageddon, the final battle between Heaven and Hell after the Antichrist has been brought to Earth.

I admit I had great doubts about a couple of things, such as the show being set in 2018 as opposed to 1990s like the book. I also was not too sure about Tennant being cast as Crowley. He was much too Doctor Who for me and I did not think that he could bring out the demon, although a kind demon, in Crowley. But Tennant (and Sheen as well) was perfectly cast, although I would love to see more hissing from him.

My favorite parts were any scenes where Aziraphale and Crowley interacted, especially the first scene in Eden and the history of their friendship that we see in the third episode. It really highlights how Heaven and Hell, or Good and Evil for that matter, are not so black and white. Aziraphale does break the rules and slightly rebels while Crowley shows his kind side a lot of times.

I really enjoyed all the little details and Easter Eggs in the show, such as mention of unicorns in Mesopotamia with Noah’s Ark and how angels moved around Heaven on hoverboards. These kind of details that you do not see on your first watch-through.

Despite the show receiving accolades with critics and audiences alike, it did have some things that bothered me about it, though nothing major in the grand scheme of things. The biggest thing that I disliked about the show was the special effects. They remind me of an early era Doctor Who (9th Doctor onward) and I expected the show to have better SFX. While during the small things that was not as noticeable, it became apparent with larger explosions and it took me out of the story from time to time.

There were also some discrepancies about the costumes. While Sheen and Tennant were marvelous as Crowley and Aziraphale, Sheen’s white-blond wig was a touch too obvious at times. For me, it looked a bit uncanny valley on him; whether that was due to mishap with make-up or intentional, I cannot say. In the first episode, while angel and demon are talking in the garden, Crowley had fully yellow snake eyes and slightly different pupils. I really preferred that more ‘alien’ look for him than just yellow irises and pupils that Tennant is sporting in later episodes.

Intro was not my cup of tea, personally, but I still think it suited the show and I liked the jingle that accompanied it.

That said, I love the show and rewatch it occasionally, when I have the time. Whether you are a fan of Good Omens book or not, a fan Tennant’s or Sheen’s work, or just want some good urban fantasy to see when you have a few spare hours, I heartily recommend it.