The History of Dice
​Gail Allen 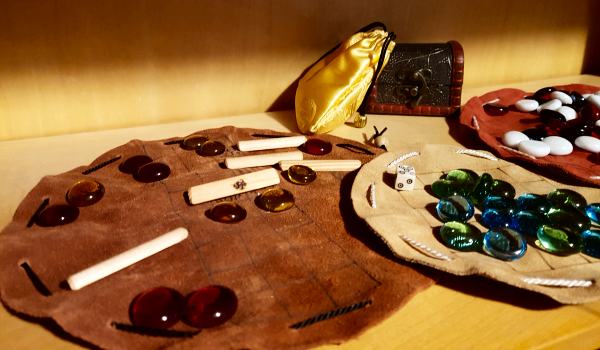 To the left the image depicts a Senet game with five sticks (one is a spare in case one gets lost). To the right other early games are shown as well as a bone die.
October 2020

The oldest board game we know of is Senet, which was played in Egypt as early as 3100 BC. Though it does not use dice as we commonly know them today, it is still worth considering as the beginning of the history of dice since it uses the same mechanics modern dice do – throwing an object that indicates a random number by how it falls.

Dice that look a little more like our modern dice were made from the knucklebone from hoofed animals that could fall in four different positions. These dice were not only used for games though; they were used to divine the future. The ancient Romans even had a goddess responsible for determining how the dice would fall – Fortuna, also known as Lady Luck. They weren't above creating a little bit of luck for themselves too, however, as a loaded die has been found in Pompeii. Loaded dice look normal, but have been made so that one side is heavier than the others. This will cause the opposite side to be turned upwards more often than pure chance would have it appear.

At some point dice started being carved from bone rather than simply using the knucklebone. This created six-sided dice. The first time we see such dice was 900 BC near Rome. 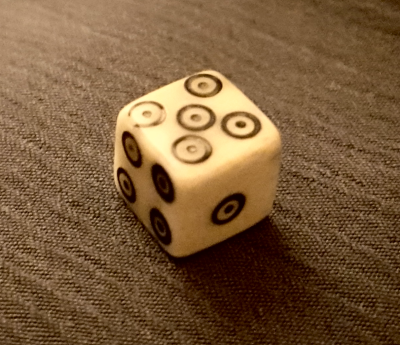 A replica of a Viking bone die.
Vikings also created dice out of bone, which they used to play games, but like the Romans they too believed that dice had further meanings than that. Indeed there is a rune, Perthro, which simply means ”Dice Cup.” It is associated with windfalls and chance, but it also calls attention to the two sides of life that determine the outcome of all situations. On one side we have free will to do as we please, but we must also contend with chance occurrences. Like a player of dice is subject to how the dice fall, but is otherwise free to use that to move the pieces as he wishes and use what he is given to its best effect.

These days dice can be made of just about any material and with any amount of sides. The most common, however, is plastic dice with six sides. Other dice exist too with side counts of 12 and 20 being relatively common in roleplaying games. They are not a purely modern occurrence as both of these types of dice have been found in Egypt in 300 BC and 150 BC respectively.

With the rise of computers, it has become possible to roll dice that are otherwise impractical to create. The computer will then generate a random number that will then be shown as the dice's results. However, computerised randomness is difficult to achieve and most of these random number generators are not truly random, but run on an algorithm that gives them the appearance of randomness. For a game of dice, this is close enough to true randomness, but for scientific purposes, it is still not considered true randomness.