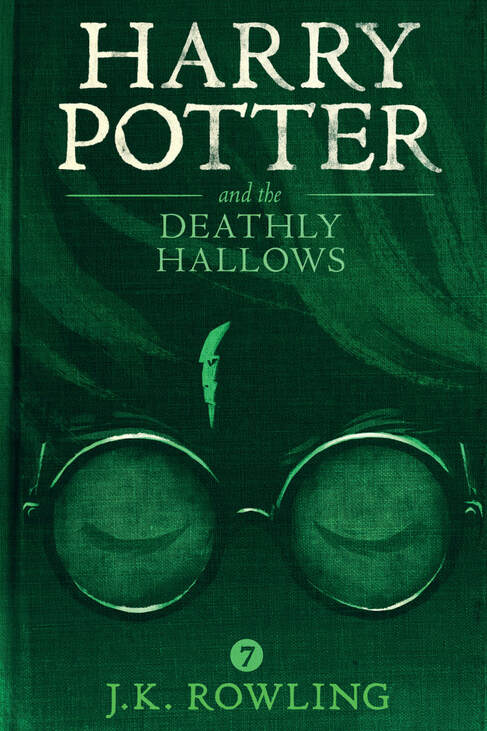 Welcome to the Autumn term! This year our Read-Along has begun with Harry Potter and the Deathly Hallows.

Our Read-Along is off to a great start and we've over twelve participants so far (I think thirteen is a great number, don't you?). We read one chapter each week, complete two weekly tasks, and answer trivia questions daily. The rewards, other than the enjoyment of reading the Harry Potter novels again and sharing that love with others? You earn scales! Scales are the Slytherin points system.

During the first week of September, we began with Chapter One, The Dark Lord Ascending, and the month by creating a Death Eater character. How would we behave towards Lord Voldemort and what role would we play in his inner circle? Most, if not all, of the characters who were created seemed to prefer to not be an active part of the inner circle at all! Our second question speculated about the white peacock that startled Snape and Yaxley while walking to Malfoy Manor. What could the peacock represent? Most seemed to think this peacock was symbolic of Lucius Malfoy, although one person thought it was connected to Draco Malfoy.

The second week found us reading Chapter Two, In Memoriam, and comparing Elphias Doge's warm memorial about Albus Dumbledore to Rita Skeeter's salacious tell-all gossip book. If we were to memorialize Dumbledore, what would we say? We next thought about the cup of tea Dudley left Harry, who wondered it was a booby trap and asked if we had ever set booby traps or been caught by one?

September's week three had us enjoying Chapter Three, The Dursleys Departing, and speculating about what Petunia Dursley was about to say to Harry before turning away and walking out the door. Next, we thought about each of the Dursleys and how they behaving and treated Harry Potter when we met them in the first book. Have any of them changed much as people or in their attitudes towards Harry?

For the final week of September, we read Chapter Four, The Seven Potters, and asked which protector and mode of travel you'd prefer if you were one of the “Harry Potters.” Kingsley Shacklebolt and Alastor Moody were popular choices, but Tonks and Bill Weasley were chosen as well. For our next fun task, we plotted which changes we'd make to Hagrid's motorbike. We all seem to agree – cup holders are a must!

October arrived and we kicked off the month by examining Chapter Five, Fallen Warrior, and writing a short scene with one of the Harry-protector pairings and their encounters with their attackers. For our next task, we decided to focus on something lighter and wrote security questions and answers for the various characters.

We next dived into Chapter Six, The Ghoul in Pajamas. We first wondered what sort of curse could be placed on 12 Grimmauld Place that would both keep out Severus Snape and bind his tongue if he ever tried to talk. Finally, we thought about how Hermione changed her parent's memories and Ron and Arthur Weasley dressed up the family ghoul in order to keep their families safe,and asked ourselves what sort of protections we'd use to keep our own families safe if we found ourselves in the same situation.

That's it for now! Don't forget: you can still complete tasks for Chapters Five, Six, and Seven until October 31st. There's more fun to come, and you are welcome to join the Read-Along at any time! See you in the Dungeons.